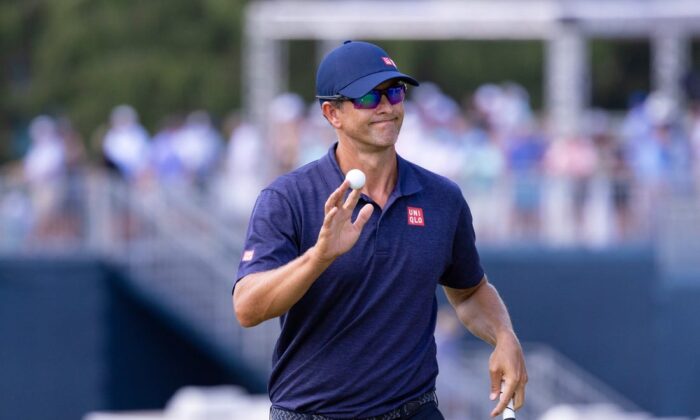 Adam Scott reacts after his birdie putt on the sixth hole during the second round of the BMW Championship golf tournament, Wilmington, Del., Aug 19, 2022. (Bill Streicher-USA TODAY Sports via Field Level Media)
Golf

Adam Scott of Australia shot a 2–under–par 69 Friday to carry a narrow 36-hole lead into the weekend at the BMW Championship at Wilmington (Delaware) Country Club.

Scott stands at 8–under through two rounds, though it could have been 10 under were it not for a late double bogey.

Fifteen players are within three shots of Scott, making for a star-studded leaderboard at the second leg of the FedEx Cup Playoffs.

They’re all looking up at the 42-year-old Scott, who played his way into the field of 70 last week when he tied for fifth at the FedEx St. Jude Championship, the first leg of the playoffs.

Scott had four birdies and no bogeys on his card when he stepped to the tee at the par-4 17th, but after his drive missed badly right and nestled under a tree, his attempt to lay up into the fairway fell short and landed in thick rough.

It ultimately set him up for a two-putt double bogey, cutting down his lead.

“Overall, I felt really in control today,” Scott said. “When you’re playing that way, it always could be a couple better, and a poor shot on 17 was quite costly. It’s a good reminder for the weekend that I’ve really got to keep it under control and don’t want to have too many get off the map and get out of position around here.

“But I’m in great shape going into the weekend. I don’t even know when the last time I led a tournament was.”

Spieth briefly tied Scott at 8–under when he made his fifth birdie of the day, an 18-foot putt at No. 17. But he finished with a bogey at the par-4 18th.

“Really I just wanted to be bogey-free,” Spieth said. “I thought that would have been pretty impressive today, this afternoon. But overall just really managing my way around the course really well. I feel like I’m doing everything good, nothing spectacular, but I feel like in every facet of my game, it’s trending and improving.”

Scheffler birdied four of his first six holes on his way to finishing with five birdies and one bogey.

After winning four times in a span of six starts earlier this season, culminating at the Masters, Scheffler has yet to return to the winner’s circle.

“I definitely want to win again for sure,” he said. “I want to win every week I tee it up, so this week is definitely no different. I’ve put myself in a decent position. Obviously I’d like to be a little bit further up the leaderboard…but I’ll definitely have a good chance going into the weekend.”

There was no 36-hole cut Friday, but notable names who are far off the pace include Jon Rahm (1–over) of Spain and Tony Finau (3–over).