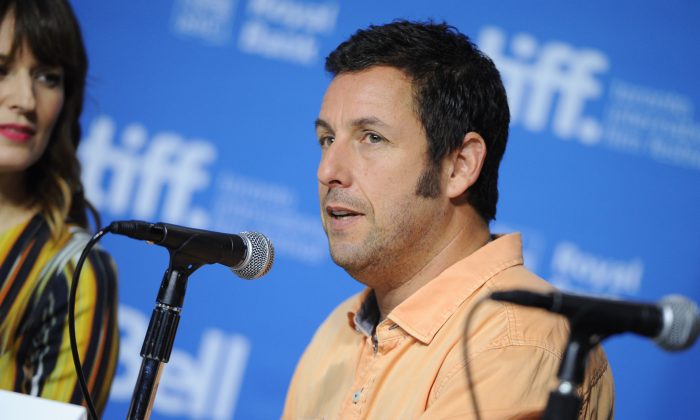 TORONTO—Adam Sandler and Jennifer Garner are parents each with two kids. Although they have their doubts about the security and usefulness of the web, they also say that they’re not as tech savvy as we might imagine them to be.

The two also star in the upcoming Jason Reitman drama “Men, Women & Children,” a social commentary on our current, fast-paced, technology-driven world and the difficulty of finding intimacy in that world. The film takes a looks at a few families, and shows the danger of internet and its impact on human relationships.

“As a parent you realize that there’s stuff out there that can be painful to everybody,” Sandler said during the press conference for the film at the Toronto International Film Festival (TIFF) on September 6, 2014.

“It’s terrifying as a parent to face this whole new world of technology because as grown-ups, I mean Rosemarie [Dewitt] and I don’t even use this stuff at all,” Garner agreed.

While Sandler admits that he’s not all that tech savvy, he acknowledges the helpfulness of the net, which is able to answer every question instantaneously.  “You’re [in the car], driving with your family, and someone says ‘What year did such and such come out’ and you just hit a few buttons and you know it,” he gave an example.

Jennifer Garner said that she actually goes so far as to try and restore the ways of the old days.

“I’m known as the aunt that sends the best care packages to kids camp, and my only requirement is that I have to get a real letter. So I’ve kind of become the old school fogey-auntie who will just bribe for actual connection,” Garner said.

Although Garner did say she uses the internet to search for recipes. Neither she not Sandler Google themselves, and unless their mother or friend approaches them with some concern about some news that they’ve heard, they don’t bother reading up on any rumors going around on the internet.

“I don’t do it, I’m too lazy, and I have too much stuff going on,” said Sandler, noting that any future involvement in Twitter is highly improbable.