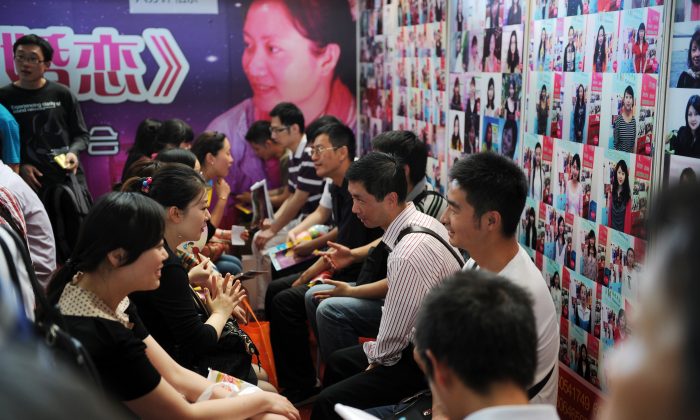 Visitors participate in speed dating at the second Shanghai Marriage Expo in Shanghai on May 27, 2012. (Peter Parks/AFP/Getty Images)
China

A Chinese man has become the butt of jokes on Chinese social media for having outlandish expectations of his future wife—and for using his father’s supposed job title as leverage.

According to an advertisement on a marriage bulletin board in Wuhan City’s Liberation Park, the would-be bride of Mr. Hu, a 43-year-old resident of Jiang’an District in Hubei Province, must have a “college degree, a job, pretty face and good body, and must give birth to a boy.”

When asked by Chutian Metropolis Daily what would become of the woman he marries if she doesn’t produce a son, Mr. Hu said: “It doesn’t mean that we would get a divorce.” He added that his parents also desire a grandson.

A Chinese netizen decided to give Mr. Hu a little biology lesson on the popular microblogging site Sina Weibo.

“Do you not know that the sex of a baby is determined by the father’s X and Y chromosomes? With your level of intelligence, you don’t deserve a wife,” wrote “thatArtemis.”

According to his ad, Mr. Hu is doing quite well in life on his own—he claims to be the chief of a state-run company and makes 6,000 yuan (about $930) a month—but he decided to add the line “my father is a bureau chief” at the end of the ad.

Chinese netizens took aim at Mr. Hu’s brag, which is by no means small because top Chinese Communist Party cadres are privileged beyond ordinary Chinese citizens.

“Yet another person who boasts ‘My father is Li Gang and I’m wealthy,'” wrote a netizen from Hubei.

“My father is Li Gang” became an online catchphrase after a prominent hit-and-run incident in October 2010. Li Qiming, the 22-year-old son of Li Gang, a deputy police chief in the city of Baoding in Hebei Province, had ran over two female college students while drink driving. When he was finally apprehended, Li Qiming shouted the now popular phrase because he believed that his father’s status would grant him immunity; he was later found guilty and sentenced to six years in prison.

Senior Party cadres are typically allowed to stay in office until they are 65.