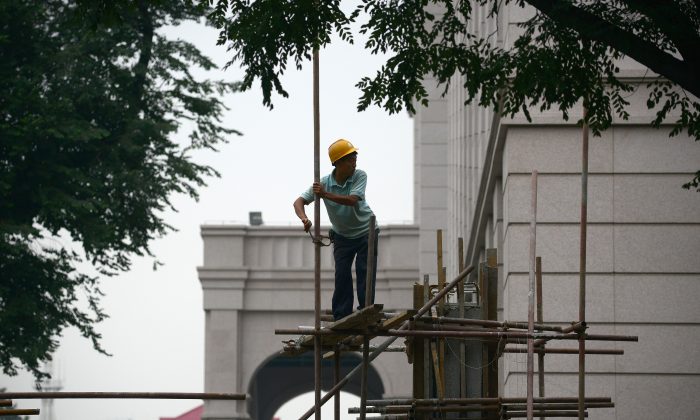 This picture taken on July 11, 2013 shows a Chinese worker putting up the scaffolding at a construction site in Beijing. The Chinese economy could be $1 trillion smaller than thought, according to an economist's number crunching. (WANG ZHAO/AFP/Getty Images)
China

Actual Chinese GDP $1 Trillion Less Than Thought to Be

China’s Gross Domestic Product (GDP) is more than $1 trillion less than published because baseline Chinese economic data on housing is manipulated and unreliable, says Christopher Balding, a professor at China’s HSBC School of Business in Shenzhen.

Using data on consumer price inflation published by the National Bureau of Statistics China (NBSC) data, Balding came to his conclusion while attempting to reconcile the official data to third party data.

“The primary point of the paper is not simply to reveal more discrepancies in the Chinese economic data, which it does, but also to measure the impact of these fraudulent statistics on real economic activity,” Balding said on his website, Balding’s World.

“When you simply make economic data up, of course the numbers are always going to look good,” he remarked.

Incorporating this change in the Consumer Price Index into real GDP calculations reduces total actual GDP by a mid-range estimate of 8-12 percent or about $1 trillion in purchasing power parity (PPP) terms. This means, in simple terms, peoples’ money does not buy as much because of the hidden inflation.

The study reveals that, according to the NBSC, prices of urban private housing only increased 6 percent between 2000 and 2011, while rentals prices increased in excess of 50 percent during the same period. By classifying most Chinese households as private housing rather than rentals, NBSC assigns the significantly lower inflation rate to the majority of the population.

Even though beginning in the year 2000, nearly two-thirds of Chinese households were in rural areas, the NSBC applied a straight 80/20 ratio of urban to rural private housing. This further skewed the accuracy of the final data, mis-weighting the rural population by nearly 50 percentage points.

“Furthermore,” Balding writes, “you continue to add up all these little ways that the NBSC is fraudulently manipulating the data and you arrive at some pretty big numbers. As the saying goes, a trillion here and a trillion there, and pretty soon, you are talking some serious money.”