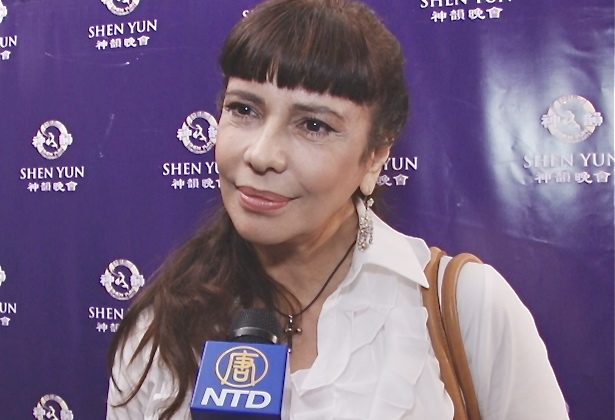 Actress Susana Romero: ‘This is a show to take all over the world’

“Wonderful, my daughters brought me,” she said during intermission. “It is wonderful, not merely because of the costumes, the number of dancers on stage, the dances and so on … it’s all very magical, as the colors are so warm and so beautiful—the dancers seem to float, they seem not to set foot on the ground.”

“Furthermore, it is for the whole family. The kids can enjoy it because there are parts that are funny, [specially] for the youngsters who love martial arts too.”

But, above all Ms. Romero loved the female dancers.

Mrs. Romero began her career as a teenager. In 1973, she was crowned Miss Argentina and won 6th place as Miss Universe in the same year. During this time, Ms. Romero also made a successful career as a model and graced numerous renowned fashion magazines. She has also appeared in television and in comedy sitcoms.

Shen Yun’s website says, “A performance by Shen Yun is a presentation of traditional Chinese culture as it once was: a study in grace, wisdom, and the virtues distilled from the five millennia of Chinese civilization.”

“They are all wonderful,” said Ms. Romero.

One of her daughters had studied classical dance for many years.

“The truth is I’m delighted to have the chance to say [that], and I’m with my two daughters who are also fascinated with the show.”

“The dancers have something magical, as if it is all there in the air. They float with these costumes.” The clothes … they are so ethereal that it helps them to stand out,” said Mrs. Romero.

Every costume displays a splendid spectacle—from imperial dragon robes, phoenix coronets, and cloud capes, from the civil official’s headdress and robes to the warrior’s helmet and armor.

“I’m delighted to have the chance to see it. My two daughters who are here are also fascinated with the show,” she said.

Ms. Romero said she loved the digital backdrop scenes that interacted with the artists and stage.

“This is something that I have not seen—a show inside the stage design and it is very beautiful,” she said, praising the dynamic animated backdrops.

From the time the curtain rose, Ms. Romero said she felt transported back in time, a time when ancient China saw the emergence of earthly and divine beings living in harmony.

Ms. Romero loved the music of the Shen Yun Orchestra. “The show is very magical,” she said.

“This is a show to take all over the world,” Ms. Romero said.

She also said the company chose well to launch its all-new 2013 world tour from there.

“Argentina always brings good luck to shows,” she said, particularly shows that come from another country.