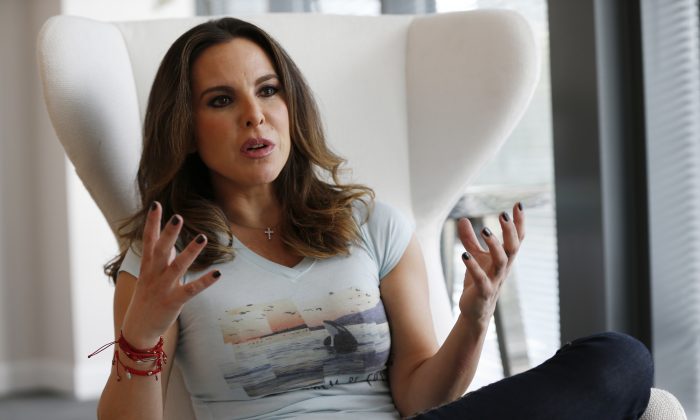 Mexican actress Kate del Castillo gestures as she speaks during an interview with The Associated Press in Miami on Jan. 16, 2017. (AP Photo/Wilfredo Lee)
International

MIAMI—Mexican actress Kate del Castillo said Monday that her involvement in actor Sean Penn’s interview with drug lord Joaquin “El Chapo” Guzman has cost her acting jobs and a “macho” Mexican government is persecuting her only because she’s a woman.

Del Castillo had to shoot her upcoming Netflix series “Ingobernable”—or “Ungovernable” — in the United States because she fears she’ll be detained if she returns to Mexico. The actress still faces government accusations of obstruction of justice and money laundering related to the 2015 meeting with the Sinaloa cartel leader, who was on the run after his second escape from a Mexican prison.

In an interview with The Associated Press, del Castillo said she’s grateful to Netflix for standing by her.

“It’s not been a good year,” she said. “I couldn’t work because people didn’t want me, because they were afraid.”

Del Castillo will release a campaign Tuesday with People for the Ethical Treatment of Animals, calling on Miami Seaquarium to release its orca named Lolita into a coastal sanctuary. In videos produced by PETA in English and Spanish, del Castillo urges people to boycott marine parks.

She starred in a similar campaign for PETALatino last year criticizing SeaWorld’s treatment of its orcas. In Mexico, the actress also lobbied with PETA to ban bullfighting and circus animals.

In an interview at a Miami hotel, del Castillo said she hoped Seaquarium and SeaWorld parks would soon follow the iconic Ringling Brothers and Barnum & Bailey Circus in closing for good. Feld Entertainment will close its circus permanently in May because of falling ticket sales, high operating costs and changing public tastes in entertainment amid prolonged battles with animal rights groups.

Del Castillo said her activism has made her somewhat regret acting in the 1996 Mexican telenovela “Azul,” which also starred Keiko, the orca made famous in the film “Free Willy.” The orca was released into the wild in 1998 and died in 2003.

“I could have done more,” del Castillo said.

Now living in Los Angeles, de Castillo said she won’t let her exile from Mexico dampen her activism, though she does worry about her parents’ security in Mexico. Del Castillo laughed at the irony of starring in “Ingobernable” as the first lady of Mexico (“The timing is no bueno for me,” she said), and she cautioned her fans and critics to remember the political series is fictional.

“I’ve done nothing wrong. Probably it was a little too risky. You can like it or not, but it’s nothing illegal,” she said. “Why am I the only one who is being persecuted? Because I’m a woman. If I was a man, this would never have happened. I get it, especially in Mexico—we’re very macho.”

Guzman was recaptured in January 2016 and is fighting extradition to the U.S., where he faces drug trafficking and other charges. Del Castillo said she still plans to make a movie about him once her legal dispute with Mexico’s government has ended.

At roughly 52 years old, Lolita is the oldest orca living in captivity, and the only one in the U.S. to live outside a SeaWorld park. PETA and other animal rights groups have for years sought to have Lolita released into a protected marine pen in Puget Sound waters, where the female orca was legally captured in 1970.

The Jan. 6 death of Tilikum, the SeaWorld orca that killed a trainer in 2010 and was later profiled in a documentary that helped sway popular opinion against keeping killer whales in captivity, makes Lolita’s plight more poignant, said Jared Goodman, PETA’s director of animal law.

“She can have a happier ending than Tilikum did, dying alone in his tank,” Goodman said.

Messages left Monday for Seaquarium officials were not immediately returned.