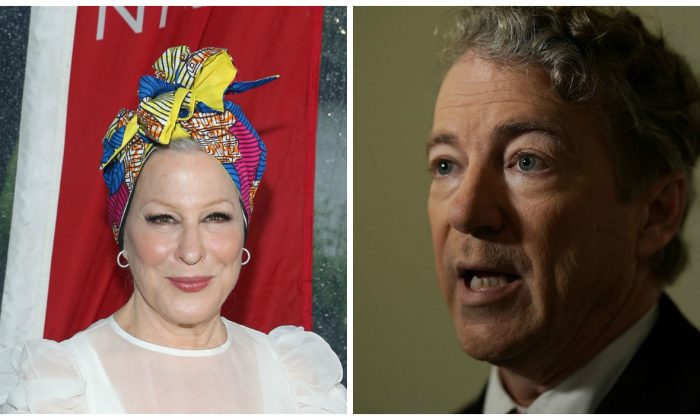 Actress Bette Midler left many shocked on Thursday after suggesting that Sen. Rand Paul (R-Ky.) should be physically attacked for being against the current budget proposal.

Paul was assaulted by his neighbor in November and suffered several serious injuries including broken ribs and bruises to his lungs.

Midler has not commented about the call for physical action against Paul since she sent the tweet out late Thursday.

Sergio Gor, one of Paul’s aides, hit back after Midler sent the tweet out.

“This is disgusting @BetteMidler calling for violence. She should be ashamed,” Gor tweeted.

Where’s Rand Paul’s neighbor when we need him?

Midler’s tweet came after Paul, who ran for president in 2016, voted against the Senate’s attempt to quickly pass legislation that would have avoided a government shutdown. The shutdown was over a few hours later.

He asked if he could have a vote on his amendment instead but leaders declined to have that happen.

People responding to Midler’s tweet were upset over what she suggested.

“Usually I don’t care what celebrities say about politics, I’ve loved Bette since I was a little kid—but this statement made me lose all respect for her. Ick,” said one.

“I made sure i saved this tweet so I can show everybody how you are advocating violence against a sitting senator. What a great role model you are,” added another.