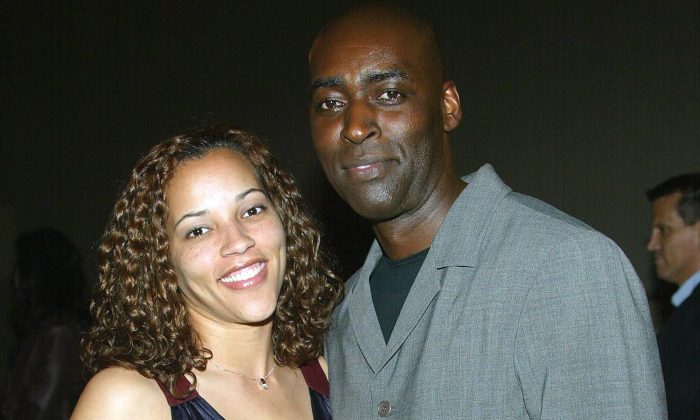 ctor Michael Jace (R) and April Jace attend the third season premiere screening of 'The Shield' at the Zanuck Theater on March 8, 2004 in Los Angeles, California. The series 'The Shield' will premiere on the FX Network on March 9, 2004. (Photo by Frederick M. Brown/Getty Images)
Crime and Incidents

Actor Michael Jace From ‘The Shield,’ Convicted of Killing His Wife Near Their Kids

Actor Michael Jace, a police officer from TV show “The Shield,” was convicted on May 31 of second-degree murder in the deadly shooting of his wife.

The jury, made up of six men and six women, decided on the verdict, which was announced in court after a week-long trial.

Defense lawyers acknowledged that Jace killed his wife, April, but argued he should be convicted of voluntary manslaughter because it wasn’t a deliberate act.

However, a prosecutor told jurors that Jace was mad because his wife wanted a divorce. Evidence presented at the trial showed that the actor shot his wife three times in their home on May 2014—once in the back and once in each leg.

Jace, 53, shot his wife in a hallway in front of their young sons, who were ages 5 and 8 at the time.

She was killed after coming home from a youth baseball game.

Text messages presented during the trial show Jace had told his wife he had left their home, but instead was waiting with a loaded revolver.

Jace, who played a police officer on “The Shield,” told authorities that he only wanted to injure his wife, not kill her.

“I was just angry,” Jace told investigators, according to a released transcript.

One of the boys who witnessed the murder testified in court during the trial. Jace’s 10-year-old son said he heard his father tell his mother, an avid runner, “If you like running, then run to heaven” before shooting her legs.

Jace told authorities he wanted to kill himself after shooting his wife, but could not follow through.

The actor, who appeared in “Forrest Gump” and the 2001 film “Planet of the Apes,” could face 40 years to life in prison.

April Jace, 40, was a financial aid counselor at Biola University