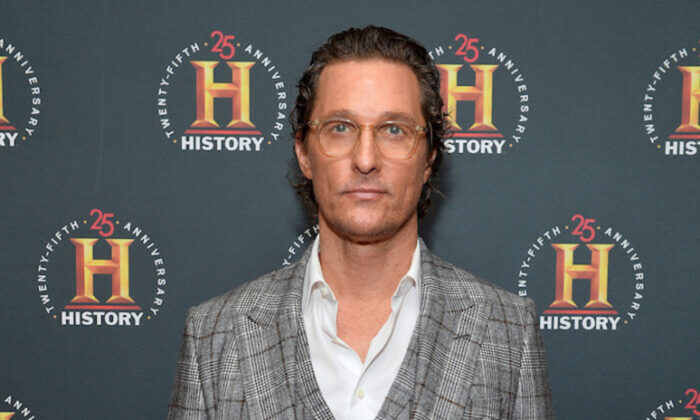 Hollywood actor Matthew McConaughey says he is against COVID-19 vaccine mandates for children and will not be forcing his own kids to get the shot until he has “more information” about them.

The 52-year-old actor is married to Brazilian-American model and designer Camila Alves and the couple share sons Levi, 13, and Livingston, 8, and daughter Vida, 11.

Speaking at The New York Times’s DealBook summit on Tuesday, McConaughey explained that while he himself has received both vaccination shots, he plans to hold out a little while longer before deciding whether to not to have his children vaccinated too.

His comments come after the Centers for Disease Control and Prevention (CDC) on Nov. 2 recommended that nearly every child in the United States between 5 and 11 get Pfizer’s COVID-19 vaccine.

Over 1.6 million children are either getting Pfizer’s vaccine already or scheduled to get it, Biden administration officials said in a virtual press briefing on Wednesday.

“We just said we can vaccinate kids. I want to trust in the science,” McConaughey said Tuesday. “Do I think that there’s any kind of scam or conspiracy theory? Hell no I don’t. We all got to get off that narrative. There’s not a conspiracy theory on the vaccines.”

The actor noted that he and his wife are both vaccinated, and that, “I didn’t do it because someone told me I had to. I chose to do it.”

McConaughey said his 90-year-old mother Kay, who lives with the family, is also vaccinated and has received a booster shot but that he has reservations when it comes to vaccinations and children.

“Right now, I’m not vaccinating [my young children], I’ll tell you that,” he said.

“I couldn’t mandate having to vaccinate the younger kids. I still want to find out more information,” he continued. “There’s gonna come a time, though—and there has already in these last two years, obviously—there’ll come a time where you’re gonna have to roll the dice one way or the other and go, where are the numbers in my favor? I’m vaccinated. Wife’s vaccinated. … We’re over here just trying to live as healthy a lifestyle as possible, but I couldn’t mandate it for kids just yet.”

An average of 300,000 shots of Pfizer have been administered to children aged between 5 and 11 in the United States within the last 7 days, and 700,000 of the kids are scheduled to get a shot at pharmacies in the coming days, the White House said Wednesday.

There are approximately 28 million children between 5 and 11 in America and the vaccine is also being administered at schools, malls, clinics, children’s hospitals, and doctor’s offices.

While the Biden administration has been pushing to vaccinate children with kid-sized doses, which are one-third the amount of the normal shot, some experts who oppose them say kids are at little risk of severe disease when they contract COVID-19.

Separately, Director Rochelle Walensky told reporters Wednesday that parents have been “breathing a sigh of relief” after the jab was expanded to the age group.

“While children remain more resilient than adults to this virus, they still remain at risk. And with the help of vaccines, we can prevent COVID-19 and many other diseases that were once fatal,” Walensky said.