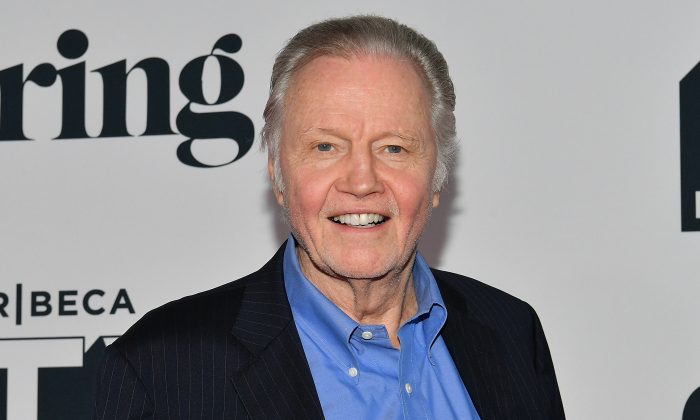 Jon Voight shared a personal Twitter post over the weekend with a special “holiday message” for his fans.

The 79-year-old veteran actor and star of the television show “Ray Donovan,” as well as countless other productions, posted the video on Dec. 23, saying there was something that was bothering him.

“I’m happy all the time actually, except there are things that bother me,” said Voight in the video. “Most especially what bothers me is people trying to hurt our president of the United States.”

Voight has been very outspoken about his support of President Trump and conservative policies throughout the campaign and presidency.

“He’s got a huge amount on his plate,” said Voight of the president. “He’s doing such a good job every day. He’s doing amazing things really, and the news is not representing it, and there are people who are trying to cook up slanders and lies to bring him down. Can you imagine it?”

“This is our country. We’re Americans. We should support our president and be very, very happy that we have this man in the White House who’s doing so much good for our country. Anyway, Merry Christmas!” said Voight.

The actor’s message resonated with many of his fans, who left comments showing their support.

“Used to see you in grocery stores and restaurants back in the 70s in San Fernando Valley where I grew up. Always respected your privacy. So thankful to see you become a great patriot and conservative voice amidst the majority of your liberal peers. God Bless You Sir!” wrote Tricia Tulak.

“I agree! Trump is doing great things for our country! Merry Christmas to you sir!” commented Vicky L. Platt.

In an interview with Fox’s “Life, Liberty & Levin” in September, Voight also said he believes that the left is attacking the President because he is effective.

“The virulence is because he’s effective. That’s what the virulence comes from. He’s actually doing what he said he would do,” Voight told Fox.

He also said there are people “trying to destroy this presidency. It’s that simple.”

Although many actors and celebrities have spoken strong words against President Trump, the actor said there are still plenty of Americans in Hollywood who support the president, even though they may not be as visible.

“I get a lot of support from people who I appreciate, who I respect. It’s not all one way,” said Voight. “There’s enough people around who are of a conservative nature.”

Jon Voight’s lengthy acting career extends back to the 1960s, with more than 90 different television and movie roles. He won an Oscar for the film “Coming Home” in 1979, and he’s a four-time Golden Globe winner for the television series “Ray Donovan,” as well as the films “Runaway Train,” “Coming Home,” and “Midnight Cowboy.”

His most recent movie release was “Orphan Horse,” released in November. His future films in production include “Roe v. Wade,” and “Reagan,” according to his IMDB profile.