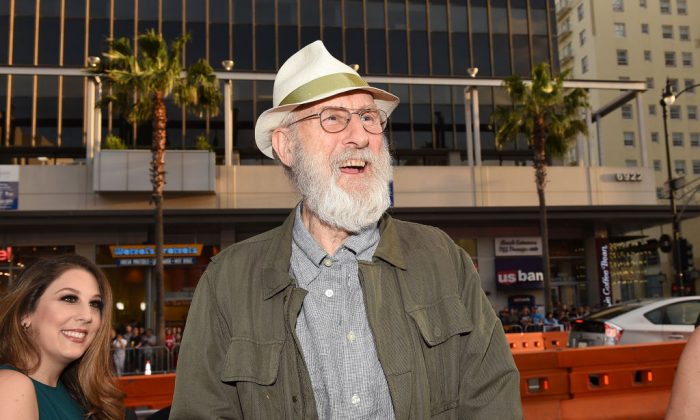 Actor James Cromwell warned that there would be violence in the streets if Democrats don’t win the midterm elections, which are set for early November.

Cromwell, a longtime character actor, was honored at the Carney Awards and took the time to speak about what he thinks would happen if Republicans maintain control of Congress and the Senate.

“This is nascent fascism. We always had a turnkey, totalitarian state—all we needed was an excuse, and all the institutions were in place to turn this into pure fascism,” Cromwell told the Variety website on Oct. 29. “If we don’t stop [President Trump] now, then we will have a revolution for real. Then there will be blood in the streets.”

It’s unclear what sort of political expertise Cromwell has that makes his opinions informed. He later added to his statement in his acceptance speech.

“We’re living in very curious times, and something is coming up which is desperately important to this country and to this planet, and that is an election, in which hopefully in some measure we are going to take back our democracy,” Cromwell said.

“We will have a government that represents us and not the donor class. We will cut through the corruption, we won’t have to do what comes next, which is either a non-violent revolution or a violent one, because this has got to end.”

The comments came after Sen. Bill Nelson (D-Fla.) told a crowd that he thinks the United States could be nearing a point of genocide.

“When a place gets so tribal that the two tribes won’t have anything to do with each other … that jealousy turns into hate,” Nelson said.

“And we saw what happened to the Hutus and the Tutsis in Rwanda, it turned into a genocide. A million people hacked to death within a few months. And we have got to watch what’s happening here.”

The comments also came after a host of Democrat leaders have advocated for violence or aggressive confrontations of Republican officials and their supporters.

Eric Holder, attorney general under President Barack Obama, told a crowd in October that they should not be civil to Republicans but instead kick them.

Hillary Clinton, the former presidential contender, also in October said, “You cannot be civil with a political party that wants to destroy what you stand for, what you care about.”

“That’s why I believe, if we are fortunate enough to win back the House and or the Senate, that’s when civility can start again,” she said.

Rep. Maxine Waters (D-Calif.) told a crowd in June, “If you see anybody from that Cabinet in a restaurant, in a department store, at a gasoline station, you get out and you create a crowd and you push back on them, and you tell them they’re not welcome anymore, anywhere.”

And Sen. Cory Booker (D-N.J.) told supporters in July to “get up in the face of some congresspeople.”