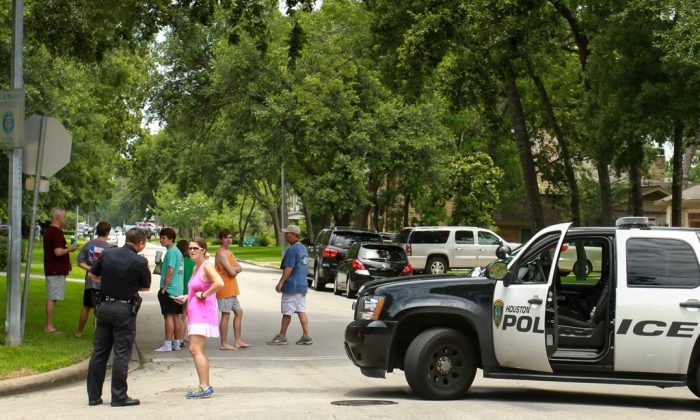 Police block the intersection at Wycliffe and Apple Tree as they respond to a shooting in Houston on May 29, 2016. (Gary Fountain/Houston Chronicle via AP)
US

HOUSTON—There’s a concerning pattern in Houston that’s lasted more than a decade, activists and attorneys say: Nearly every officer-involved shooting is deemed justified by the law enforcement agency, and grand juries tend to concur.

They point to, among others, the August 2015 shooting of a 27-year-old man who had been suffering a mental health crisis and was stumbling around naked and unarmed in a Houston hospital, saying such incidents are not thoroughly scrutinized and demonstrate a lack of officer training.

Houston police say its training and policies make it clear the use of unnecessary or excessive force isn’t tolerated, that such incidents are carefully reviewed and that its training program on how to deal with individuals with mental illness and de-escalate dangerous situations is considered a model program nationally.

“If it can happen to me, it can happen to anyone. It’s important for people to be aware that these things happen,” said Alan Pean, who survived the hospital shooting and filed a lawsuit Tuesday against the city of Houston, the two officers involved, the hospital and others. Neither officer was disciplined. A grand jury in March declined to indict Pean, who now lives in New York, on two counts of aggravated assault of a police officer, and a third charge of reckless driving was dropped.

Pean’s attorneys say there are similar cases that show a pattern of excessive force, including the 2012 death of 38-year-old Kenny Releford, who was fatally shot by an officer who went to his home after Releford had suffered a psychotic episode. The officer was cleared in the shooting. Releford’s family also sued the city, and the case is set for trial in October; Pean’s attorneys also represent Releford’s family.

While some local community leaders and activists remain critical of what they see as the Houston Police Department’s recurring issues with use of deadly force, the incidents haven’t sparked large-scale protests like those seen in other parts of the U.S. that have dealt in recent years with high-profile shootings involving officers. Community leaders have credited the recently retired police chief’s public outreach efforts with helping maintain calm.

Between 2005 and 2012, nearly all shootings by Houston police were deemed justified, including 99 incidents from 2009 to 2012, according to court records and evidence gathered as part of the Releford lawsuit and a 2011 lawsuit. And the Houston Chronicle reported in March that the Police Department has declared every intentional officer-involved shooting since 2010 —more than 150 — justified.

“Innocent people in this city, including innocent people with mental health issues, are going to continue to be shot and killed by HPD officers until there is a cultural change in HPD,” said Walt Cubberly, one of Pean’s attorneys.

Houston police spokesman Kese Smith referred questions to city officials. Houston city spokeswoman Janice Evans said she couldn’t comment due to the pending litigation. But as part of the Releford lawsuit, several Houston police officials have given statements about department policies related to the use of deadly force.

“However, I do not know of any (crisis intervention training) standard that would prohibit an officer from taking reasonable actions to protect him/herself or another from the risk of serious bodily injury or death posed by the actions of a person simply because that person is suffering from mental illness,” he said.

Johnny Mata, a longtime activist with the Greater Houston Coalition for Justice, said shootings like Pean’s, Releford’s and a 2012 fatal shooting of a wheelchair-bound double amputee with mental health issues foster distrust from many in the public. His organization is meeting with Houston Mayor Sylvester Turner and Interim Police Chief Martha Montalvo to figure out how to “move forward and prevent such tragedies.”

Ray Hunt, president of the Houston Police Officers’ Union, said people jump to conclusions about these shootings without knowing all the facts.

“This is not something that an officer wakes up in the morning and says, ‘Oh, I hope I get involved in a shooting today.’ People … who claim that’s the mentality of police officers are just showing their ignorance,” he said.

Houston is among many police departments around the U.S. taking a hard look at deadly force guidelines, according to Chuck Wexler, executive director of the Police Executive Research Forum. His Washington, D.C.-based research and policy organization has issued a report detailing 30 guiding principles for use of force.

“I think we are at a point in this country where after several years of watching a number of very unfortunate situations unfold, we are beginning to see real change in terms of best practices in use of force,” he said.