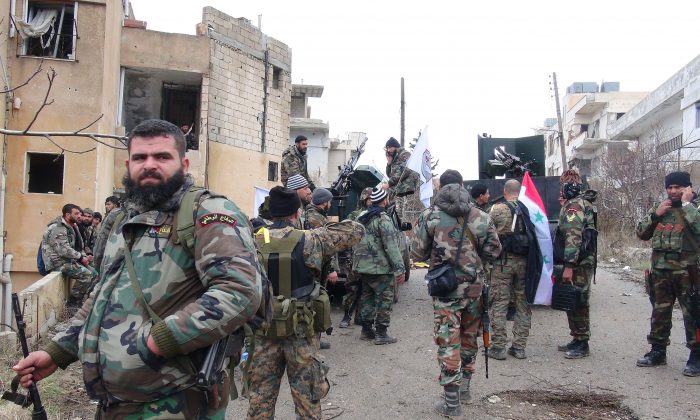 Forces loyal to the Syrian regime stand on a street with national flags after Syria's army and allied forces took full control from rebel groups of the strategic town of Salma, in the northwestern province of Latakia on Jan. 12. (Stringer/AFP/Getty Images)
Middle East

BEIRUT—The Syrian Army on Friday retook a strategic town on the doorstep of Daraa, a contested southern city that lies between Damascus and the Jordan border, according to activists and the Syrian state news agency.

The conquest of the town of Atman opens up several supply routes to Daraa, which is divided between government and opposition fighters, the Syrian Observatory for Human Rights reported. The Observatory, which relies on a network of activists inside the country, said government troops and allied militias advanced under cover of airstrikes and heavy artillery bombardment.

The conquest of the town of Atman opens up several supply routes to Daraa, which is divided between government and opposition fighters

Daraa was the scene of some of the first protests against Assad in 2011 and holds symbolic value in the narrative of the uprising that has since collapsed into a vicious civil war.

The government victory near Dara come as a second government offensive closed in on the northern city of Aleppo, touching off a mass internal exodus of residents fleeing toward the Turkish border for safety.

Assad’s troops launched a major offensive against Aleppo, Syria’s largest city, even as opposition and government representatives were in Geneva for United Nations-sponsored peace talks. Opposition activists reported more than 500 targets hit by Syrian and Russian planes in one of the most intensive air campaigns since Moscow’s intervention began late last year. Activists said troops were getting nearer to their goal of completely encircling the rebel-held eastern part of Aleppo and cutting it off from supply lines to Turkey.

Daraa was the scene of some of the first protests against Assad in 2011.

The international aid group Mercy Corps said Thursday that intensified airstrikes and fighting around Aleppo had cut off the main humanitarian route into the Syrian city, and that tens of thousands of civilians were fleeing north toward the border with Turkey.

David Evans, Mercy Corps’ regional program director for the Middle East, said in a statement Thursday that “it feels like a siege of Aleppo is about to begin.”

Turkey’s Prime Minister Ahmet Davutoglu said Thursday that some 10,000 Syrians who fled the Aleppo area were waiting at the Turkish border, seeking refuge.

Speaking at the international donors conference in London, Davutoglu said up to 70,000 others who had been sheltering in camps north of Aleppo were also moving toward the Turkish border.