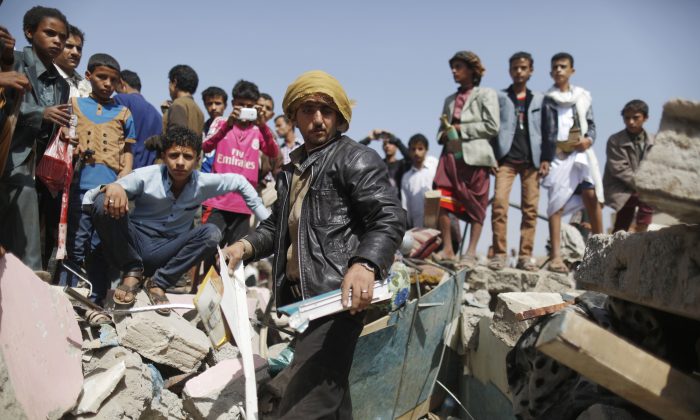 A man, center, inspects his shop destroyed by a Saudi-led airstrike at a market in Sanaa, Yemen, Monday, July 20, 2015. (AP Photo/Hani Mohammed)
Africa

LAGOS, Nigeria—Activists on Tuesday accused Nigeria’s military of killing hundreds upon hundreds, perhaps as many as 1,000, Shiite Muslims in just three days in what the country’s top human rights protector is calling “a massacre”.

The Shiite Islamic Movement in Nigeria said soldiers on Monday carried away about 200 bodies from around the home of leader Ibraheem Zakzaky, and demanded that the bodies be returned for the speedy burial required by Islamic tradition, according to spokesman Ibrahim Musa.

Odinkalu told The Associated Press that Zakzaky suffered four bullet wounds and one of his wives was killed in raids in the ancient Muslim town of Zaria, in northern Nigeria, that began Saturday and ended Monday morning. He was quoting the family doctor.

Two of Zakzaky’s sons also were killed and one was wounded, according to Musa.

Nigerian troops said the raids came after 500 Shiites blocked the convoy of Nigeria’s army chief, and tried to kill him. Army spokesman Col. Sani Usman said the Shiites stoned the convoy. But a military report seen by the AP said the group opened fire on the convoy and planned to petrol bomb the vehicle of Gen. Tukur Buratai.

Maj Gen. Adeniyi Oyebade, who was in charge of the operation, told reporters Monday night that the military acted because they had reports the Shiites were gathering for an attack. “Of course, because of the report I got that they are mobilizing, I had to order that the Gyallesu (Zakzady’s residence) and Huissaniya (shrine) be brought down,” he said.

He said both the military and the Shiites suffered casualties and that the dead are still being counted.

The three areas attacked by the military remained on lockdown Tuesday, with no one allowed to enter or leave. Musa charged wounded people are being denied medical treatment by the blocks.

Iran, seen as the guardian of the Shiite Muslim faith, condemned the killings. Iranian state TV said the Foreign Ministry on Monday summoned Nigeria’s charge d’affaires to demand that the Nigerian government take responsibility for the lives and properties of its millions of Shiites.

Nigeria’s Shiites, a movement started 37 years ago by Zakzaky, who dresses in the robes and turban of an Iranian ayatollah, often have clashed with police and other security forces over their unlawful blocking of major roads to hold religious processions.