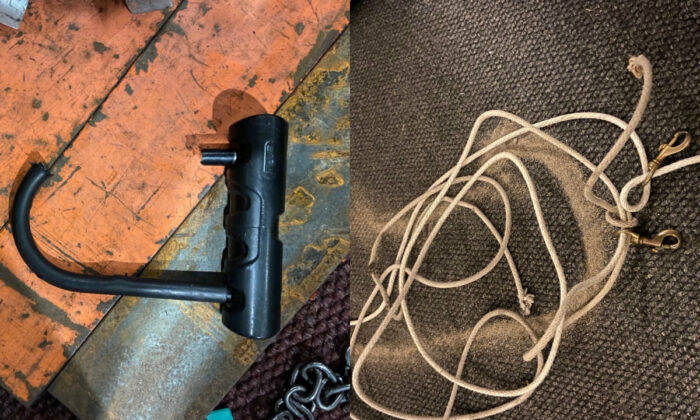 A group of people who appeared to be part of anarcho-communist group Antifa blocked an exit from a police precinct in Portland amid protests Tuesday night by tying down a roll-up door.

The main doors of the Portland Police Bureau’s Central Precinct were also locked from the outside, police officials said.

The situation unfolded shortly after 11 p.m., as a group of protesters removed an American flag hanging outside the precinct. They later burned the flag, according to video footage captured by reporters, but utilized the cord for something else.

“The flag cord was tied from the door to a fire hydrant on the Southside roll up door to prevent it from opening. Additionally, the Central Precinct main doors were locked from the outside with a u-lock blocking anyone inside from leaving,” the bureau said in a statement.

“This presented a life safety issue for those inside. The flag was lit on fire and one person was injured by the burning flag. Warnings were given and the crowd left the area. Officers removed the exterior locks and objects on the doors.”

Officials shared pictures showing the cord and a u-lock that was cut lying on the ground next to a chain.

Video footage captured by KOIN reporter Jenny Young showed a group of people dressed in all black with their faces obscured tying the cord to a fire hydrant and a door that rolls up to allow vehicles to enter and exit.

The group tried convincing her to stop filming, alleging: “This is how people die.”

“You’re risking the lives of everyone,” another said, before cutting off her video.

Members of Antifa, a far-left group that has assaulted journalists in the past, usually dress similar to the people seen in the film.

Around the same time, demonstrators shouted insults at several police officers at the backside of the Justice Center, which houses the precinct. One said: “There’s going to be chapters on June 2020 in the [expletive] history book … You’re going to be a [expletive] enemy.”

Protests sparked by alleged police brutality have taken place in Portland, a city in Oregon, in recent days.

Several hundred people gathered at Jefferson High School and marched to the Fremont Bridge before dispersing around 10 p.m., police said. A separate group gathered outside the bureau. After the flag was lit on fire and one person was injured by the burning flag, officers gave warnings and the crowd left the area. Officers then removed the locks and objects on the doors.

The group marched to the Pearl District and a vehicle moved through the crowd, striking several demonstrators.

Three people were injured, two of whom were taken by ambulance to a hospital. The other was taken to a hospital in a personal vehicle. All injuries were believed to be non-life threatening.

The driver was later located and arrested. Identified as Anthony Eaglehorse-Lassandro, 27, the driver was booked on charges including reckless driving and felony hit and run.

Officers tried getting witness information at the location of the crash but no one there would share video footage of information, officials said.

The demonstrations Tuesday came after 10 people were arrested and charged amid protests the previous two days.

Robert Harden, 33, Hailey Davis-Burton, 19, and Manuel Fox, 18, were booked on charges including assault of a public safety officer. Others were charged with burglary, interfering with a police officer, and riot.

At least two reporters, meanwhile, including Beth Nakamura of The Oregonian, said they were assaulted by officers during protests.

Nakamura said she was reporting when she was slammed by a baton from behind even after making clear she was a member of the press.

Portland Mayor Ted Wheeler, a Democrat, called the claim “extremely concerning,” and asked reporters to send complaints to his office while promising an investigation into every one.