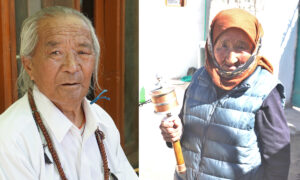 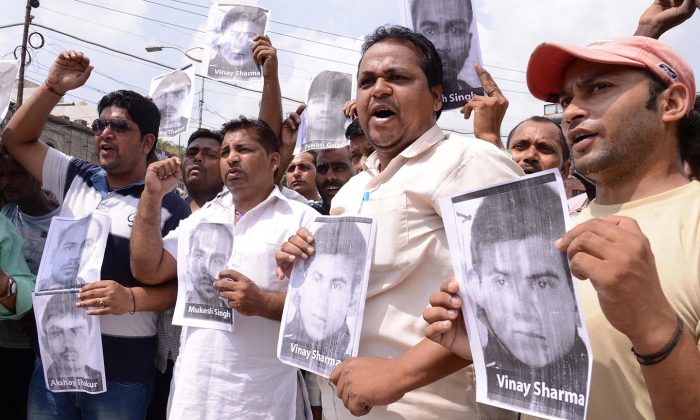 Protesters shout slogans as they hold posters of accused in a gang rape case of a student in New Delhi during a demonstration in Amritsar on September 11, 2013. Activists blame the Indian media sensationalized the case and wrongly portrayed the juvenile as the most brutal attacker. (Narinder Nanu/AFP/Getty Images)
India

Juvenile was not the most brutal attacker
By Venus Upadhayaya
Print

Activists have filed legal proceedings alleging that Indian media’s irresponsible behavior, through sensational reporting on the Delhi rape case, has tarnished the image of the country’s Juvenile Justice Law, which they claim is one of the most liberal and pragmatic laws governing juveniles in the world.

Dec. 2012, a 23-year-old New Delhi student was gang-raped by six men, one of them a juvenile. The student later died in a Singapore hospital, which, due to the brutality of the crime, caused wide-spread protests in India. During that time, media portrayed the juvenile as the most brutal attacker.

However, according to a recent Times of India report, “a statutory body ruled that the evidence against the juvenile belied media reports that he was ‘the most brutal’ of the six accused persons.” The report cited the Aug. 31 confidential order passed by the Juvenile Justice Board.

In January this year, Anant Kumar Asthana, a child rights activist and a lawyer in the Delhi High Court, petitioned the National Commission for Protection of Child Rights (NCPCR) about the media violations.

Asthana condemned the rape coverage, saying, “His [juvenile’s] name, location, parents, religion, school—everything was revealed by media. Journalists reported from his house, and from his school, with incorrect and exaggerated reports.”

Recognizing Asthana’s petition, in February, the commission issued a directive to the government’s Ministry of Information and Broadcasting to ensure that media did not further identify the juvenile.

According to Asthana, media reported the juvenile’s role in great detail long before the Juvenile Justice Board passed its verdict. “What we witnessed was a frenzy in which every news channel was competing to have the most sensational reporting [on the case],” he said.

Asthana also in August brought the issue to the Delhi High Court, alleging that media “violated the court’s judgment on media guidelines for reporting on matters related to children in the case.”

Due to his plea, the court directed the Indian government to file a status report. “This [report] has not yet been filed so the matter is listed for another hearing the last week of October when I will again raise this issue before the court,” Asthana said. “My plea is that, in this juvenile’s case, certain media violated guidelines issued by the Delhi High Court in Writ Petition Civil 787 of 2012.”

Legal proceedings have also been filed against the police for providing false information to the media. Media law teacher and Supreme Court advocate Imran Ali has filed a complaint with the Juvenile Justice Board and the board will hold a hearing on this matter on Oct. 19.

“Media reported a lot of incorrect information. The juvenile was portrayed as the most brutal—the beast. It’s most incorrect, since this is not in the police report. A few publications also disclosed his name and said that he was arrested in his village in Uttar Pradesh state, when he was actually arrested in Delhi. We believe the police illegally shared all this information with the media,” Ali said.

The activists are also concerned about the impact this has had on the way Indians perceive the juvenile justice system. According to Asthana, it’s the first time in Indian history that juvenile crime and law has been publicly debated.

“The over-exaggerated role of this juvenile and other data misrepresenting the juvenile’s crime was served up to the public and it is bound to seriously damage a well thought-out public policy and law on juvenile crime in India.

“The overzealous and sensational reporting caused public panic about juvenile crime and now the future of India’s pragmatic juvenile law is seriously threatened,” Asthana said. “Courtesy of our media, a heavily misinformed citizenry now perceives the juvenile law as an enemy of public safety.”