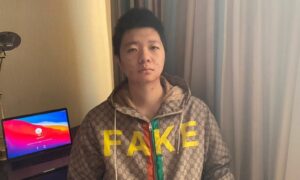 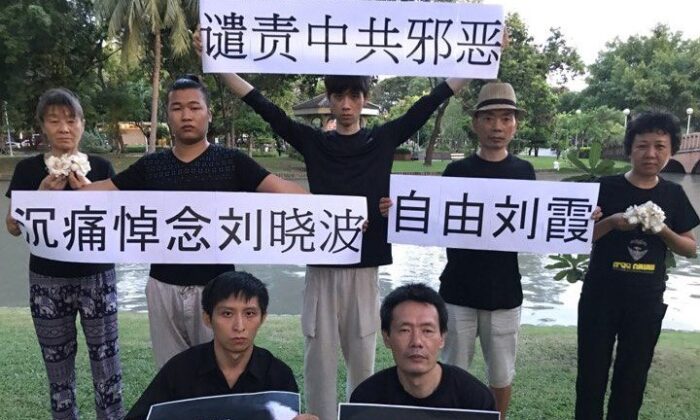 Liu Bing (first on the left in the front) and Xing Jian (second on the left in the second row) participated in an event held in Thailand to support Chinese human rights activities. Photo taken in 2017. (Courtesy of Liu Bing)
China Human Rights

Activists Call on Germany to Halt Deportation of Chinese Dissident

A Chinese dissident is facing deportation back to China by the German government. Overseas rights activists are seeking international help to stop the foreseeable persecution of the young man by the Chinese communist regime.

Liu Bing from northeastern China has been detained in a German immigrant prison. The German government will deport him back to China in August.

He was born in 1989, the year of the Tiananmen Square massacre. He fled China after suffering from frequent harassment and persecution by the communist regime because of his democratic activities in China.

Not being able to converse in a foreign language, Liu is frustrated with the current situation. Overseas activists are calling on the international community on his behalf.

Recently, the Chinese Epoch Times managed to contact Liu as he was being held in an immigrant detention center in North Rhine-Westphalia (NRW) state in Germany. Liu confirmed his difficult situation.

This year, on the eve of the 32nd anniversary of the 1989 Tiananmen Square massacre, the Chinese-language Epoch Times reported on overseas Chinese people holding memorial events in different countries. Liu was one of the participants and sent a video recording of his activity to The Epoch Times. But Liu’s Facebook account has stopped updating since June 3.

Liu said that the German authorities had bought a ticket for an Aug. 26 flight to deport him back to China and such a decision by the German government was extremely regrettable.

According to Liu, the detention center does not allow the use of smartphones to access the Internet, and he is only allowed to use a phone that has the basic phone call function.

“I fled China after experiencing many dangers,” Liu told The Epoch Times.

He flew to Serbia in August 2019, which offers a visa waiver program for Chinese nationals. He asked for political asylum while transferring to Frankfurt. He applied for refugee status upon entry at Frankfurt airport. Later he was declined, and he had to leave Germany for the Netherlands.

Liu stayed in a refugee camp in the Netherlands and planned to apply for political asylum. But Dutch police accused him of staying illegally and sent him back to Germany, claiming that, according to the Dublin III Regulation for asylum, “the first [EU] Member State in which the application for international protection was lodged shall be responsible for examining it.”

“I was planning to participate in an event to commemorate the Tiananmen Square massacre in The Hague,” Liu said. “But they did not allow me to apply for asylum in Holland.”

Many asylum seekers are allowed to stay in Holland because of the pandemic, according to Liu.

He said it is difficult to follow the Dublin III Regulation. He gave an example of refugees from the Middle East. Many of them arrived in Eastern European countries as their first entry to the EU, and they have successfully lodged applications for refugee protection in EU member countries such as Germany and the Netherlands. This is because Eastern Europe has a limited economic capacity and ability to receive refugees, Liu noted.

Activist: German Decision Is a Mistake

Xing Jian is a human rights activist who was allowed to settle in New Zealand in early 2020. Knowing that Liu faces deportation, Xing recently wrote an article for the Chinese Epoch Times expressing his concerns.

He believes that Germany made a mistake when it rejected Liu’s political asylum.

He stated that Liu and himself had participated in many rights defending activities when they were in a Thailand refugee camp.

He stated, “Together, we have supported Liu Xia, commemorating the Tiananmen Square massacre and other activities,” and over time they developed trust in each other.

He described the difficult situation for Chinese human rights defenders.

“Ordinary human rights defenders like us are relatively low-key in protest, unlike Liu Xiaobo, Liu Xia, and Chen Guangcheng, who are so famous, and our online voices usually speak for others.

“We human rights defenders, originally for the purpose of pursuing democracy and freedom, had not expected to leave our hometown to seek political asylum in a foreign country. Therefore, we would not have kept records for ourselves or deliberately built our resumes. When our personal freedom encounters extremely high risks and we have to flee, our path of asylum is extremely difficult.”

Xing expressed deep concern for Liu because the language barrier has prevented him from appealing.

He wrote: “Liu Bing’s application for political asylum was rejected. No one in Germany helped him, and no one helped him explain the specific content of the verdict. He once told me, ‘I want to appeal, even if I die, I must die on a free land.’ But he couldn’t understand the foreign language. He only knew the result of rejection, so he naturally lost the ability to appeal.”

“This would be a wrong decision. Because Liu Bing is an introvert, not good at expressing, and also a person who silently contributes to the realization of Chinese democracy and freedom.” Xing wrote.

He fears for Liu because the Chinese Communist Party (CCP) will only intensify its brutal persecution of him once he’s deported back to China.

Xing still remembered the time they spent together during their stay in Thailand as refugees: “Every night I had to work late to sort out rights defending materials online, and Liu often helped me to wrap up.”

Fearing Liu Will Be Persecuted Once Back in China

Yang Chong, a Chinese dissident now living in Canada, told The Epoch Times that he met Liu Bing for the first time in May 2013. Then they met again at the birthday party of Fan Yiping, a Chinese democratic activist. Among people in a picture taken at the birthday party, Chen Keyun and two other human rights lawyers and dissident Fan Yiping are still imprisoned in China. Yang Tingjian, a democratic activist, was sentenced to imprisonment for one-and-a-half years.

“Once Liu Bing is deported to China, he will be persecuted for sure,” Yang Chong said.

Duan Jinggang has the same fear. He believes that Liu Bing will be in trouble if he is sent back to China because Liu has participated in the global memorial events of the Tiananmen Square massacre.

“If Liu is deported back to China, he will be used by the CCP as an example to scare other dissidents off,” said Duan.

Li Xin’an and Sophia Lam contributed to the report.