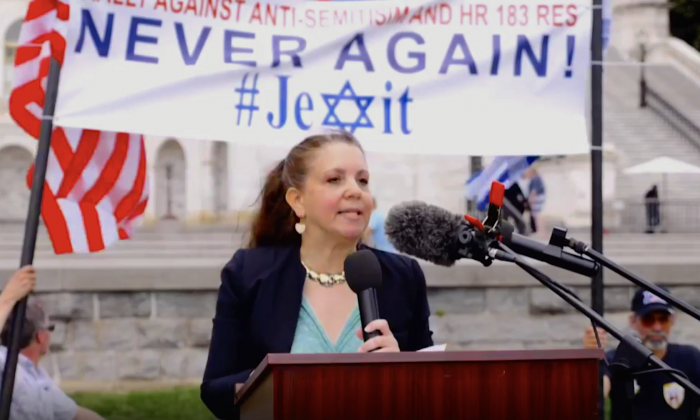 Deborah Weiss speaks at #Jexit Rally calling for Jews to leave the Democratic Party, in front of the Capitol in Washington on May 7, 2019. (screenshot/Jexit)
US News

WASHINGTON–Activists from across America assembled before the U.S. Capitol on May 7 to call for a Jewish exodus from the Democratic Party, a move many termed “#Jexit.”

According to Pew, Democratic-leaning Jews dropped from 69 percent in 1994 to 67 percent in 2017, while GOP-leaning Jews rose from 25 percent to 31 percent.   Though 60 percent of Jews have college degrees, highly educated Americans on average were “showing a strong shift toward the Democrats” during this period, according to one report, indicating the modest realignment among Jewish Americans ran counter to a broader societal trend.

Moreover, earlier this year, President Donald Trump himself quoted the leader of “Jexodus”, an analogous movement, saying “Jewish people are leaving the Democratic Party. We saw a lot of anti Israel policies start under the Obama Administration, and it got worse & worse. There is anti-Semitism in the Democratic Party. They don’t care about Israel or the Jewish people.”

Although the “#Jexit” rally was sparsely attended, it reached a large audience through social media. According to Michelle Lubin Terris, Jexit founder and rally co-organizer, a livestream of the event had 400,000 views, and over 10,000 Facebook shares.

Those attended live or virtually heard legal expert and free speech crusader Deborah Weiss build out the president’s case, summing up virtually every claim made during the day by charging, “anti-Semitism has penetrated Congress, embodied perfectly in one [U.S. Rep.] Ilhan Omar [D-Minn.], a Somali Muslim refugee, whose family fled persecution [and] got refuge in our great country.”

Today, Weiss continued, Omar “sits in Congress and spews forth with impunity her hatred not just of Israel but of Jews.  Though she and her cohorts defend her hateful comments, claiming they’re just criticizing Israel, in fact her statements have consisted of conspiracy theories against Jews and anti-Semitic tropes.”

Specifically, Weiss noted Omar “accused Jews of dual loyalty, said ‘It’s all about the Benjamins baby’ implying that Jews dominate the world with money,” and tweeted that Israel “hypnotized the world” and that she hoped Allah would awaken people to the Jewish State’s “evil doings.”

Furthermore, underscored Weiss, a New York City survivor of the 9/11 attacks, Omar characterized that jihad strike, which slaughtered nearly 3,000 innocent Americans, as “’some people did something’ – minimizing the largest Islamic terrorist attack on U.S. soil.”

While some asserted Omar’s 9/11 comment was taken out of context, Weiss pointed out, the correct context consisted of Omar “speaking at a fundraiser for CAIR, Council on American Islamic Relations,” which federal prosecutors named an unindicted co-conspirator during the largest terror finance trial in American history. CAIR was “spawned out of HAMAS and the Islamic Association of Palestine, both of which are [U.S. Department of] State-designated terrorist organizations,” Weiss emphasized.  Likewise, Omar “helped raise money for Islamic Relief, which also has terror ties,” Weiss said; “That’s the context.”

Commenting on the barrage of rockets fired by Hamas on Israel on May 5, Weiss said, “Just this past weekend, 700 rockets rained down on innocent women, children and men.  Ilhan Omar tweeted out a disgusting tweet blaming the victims instead of condemning the terrorists who launched this attack.”  Nevertheless, Weiss stressed, Omar still “holds a coveted seat in the powerful and prestigious House Foreign Affairs Committee, where her contempt for Israel and the Jews has a real-world impact.”

In a related piece published by the Gatestone Institute, well-known liberal Harvard Law Professor Alan Dershowitz wrote Omar is “encouraging the firing of rockets by Hamas and Islamic Jihad by blaming the Israeli victims for what she calls the ‘cycle of violence,’ instead of blaming Hamas and Islamic Jihad for initiating terrorist violence against innocent Israeli civilians.”

Her tweet decrying the “occupation and humanitarian crisis in Gaza,” Dershowitz argued, “justifies the double war crimes committed by terrorists who target Israeli civilians while using Palestinian civilians as human shields,” by asking rhetorically how many “rockets must be fired, and little kids must be killed until the endless cycle of violence ends?”  Finally, as a factual matter, he asks, “Does Omar not realize that Israel ended its occupation of Gaza in 2005, when Israel removed every soldier and settler from that area?”

Yet after comments like this from Omar, said Weiss, “Democrats couldn’t get their act together to pass a resolution focusing singly on anti-Semitism—and definitely not condemning her words specifically.”  According to Weiss, “it was the Black [and] Progressive Caucuses that opposed any resolution of this nature.”

Instead, Weiss vociferated, “the resolution that passed, House Resolution 183, was so watered down as to be meaningless” – so toothless, “Ilhan Omar supported the resolution and voted for it when the point was supposed to be to condemn her,” Weiss highlighted.  In fact, said Weiss, Omar and her supporters claimed victory at the first resolution passing in Congress condemning ‘Islamophobia.’

Such sentiment is not confined to Omar, Weiss noted: “Progressives and the far Left have allied with Islamists,” including “to undermine Israel and America as we know it.”  She cited Linda Sarsour, a left-leaning advocate for Sharia Law.  Sarsour helped lead the anti-Trump Women’s March, which came under withering fire for its organizers’ anti-Semitism including that of Rasmieh Odeh, a now-deported convicted terrorist bomber found guilty of the 1969 murder of two unsuspecting Jewish college students.  Weiss also pointed to the resolution condemning anti-Semitism by Rep. Lee Zeldin (R-N.Y.) which has 104 cosponsors but not a single Democrat.

Similarly, Title VI of the National Defense Education Act, Weiss noted, authorized funding for American schools to teach students strategically valuable foreign languages and specific hostile ideologies, in an attempt to prepare the U.S. citizenry for war against our enemies.  Instead, Weiss pointed out, more and more of these resources pour into Middle East Studies programs hostile not only to Israel, but to America and the West.  Thus “instead of teaching about hostile ideologies,” Weiss charged, such taxpayer-funded programs “are indoctrinating students with” those ideologies.

Even Democratic former President Barack Obama’s signature Global Counter-Terrorism Forum, she pointed out, barred Israel because of Muslim-majority nations’ complaints, and could not settle on a terror definition because those nations wished to exclude Hezbollah and HAMAS, “because terrorism against Jews doesn’t count.”

Yet Omar, Sarsour, and Democrats in the Black and Progressive Caucuses are the symptom, not the disease, Weiss summed up.  The disease, she argued, is that “multiculturalism, identity politics, and political correctness are dividing us and destroying our country; e pluribus unum—out of many, one—not the other way around.”

Finally, “the notion that all values, cultures and belief systems are equal is false,” Weiss contended; “we should not be afraid to assert that the Judeo-Christian values that undergird our founding are superior to the Marxist, Islamist and other belief systems that are totalitarian.”