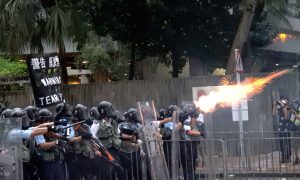 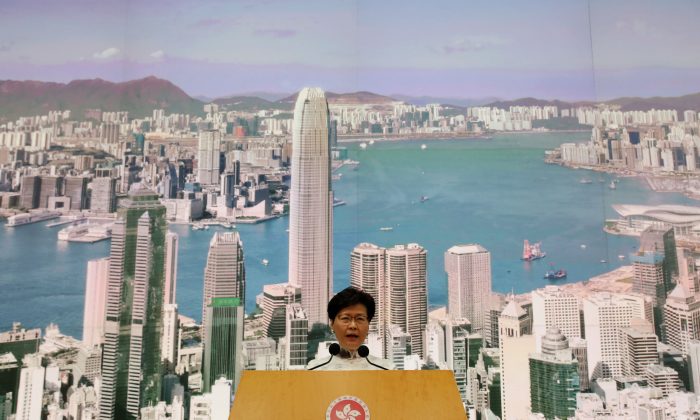 Opponents of the controversial extradition bill that sparked mass protests in Hong Kong have called for the city’s Chief Executive Carrie Lam to scrap the bill entirely and resign, after she announced the proposed legislation would be suspended indefinitely on June 15.

Lam, in a news conference, said the bill would be halted with no deadline to bring it back—effectively suspending the process indefinitely.

“After repeated internal deliberations over the last two days, I now announce that the government has decided to suspend the legislative amendment exercise, restart our communication with all sectors of society, do more explanation work and listen to different views of society,” Lam told a news conference.

The announcement came after a nearly one-week long standoff between the people of Hong Kong and the government, with nearly 1.03 million taking to the streets on June 9 to oppose the bill that would allow people to be extradited to mainland China for trial.

Three days later, tens of thousands of protesters swarmed the area outside the city’s legislature where the bill was due to be debated before the scene descended into chaos as some protesters attempted to break the police line. Local police used pepper spray, tear gas, rubber bullets, and bean bags in an attempt to remove protestors from the streets. At least 81 people were injured.

Critics, however, were not satisfied with Lam’s announcement, and have called for her to completely withdraw the bill, step down, and apologize for the excessive amount of force used by police during the clashes on June 12.

“Democrats in Hong Kong simply cannot accept this suspension decision,” said lawmaker Claudia Mo and member of the pro-democratic camp, which has opposed bill. “Because the suspension is temporary. The pain is still there.”

“Carrie Lam has lost all credibility among Hong Kong people. She must step down,” Mo added.

Pan Democrat legislator, Kenneth Leung, said the decision was “too little, too late” and demanded Lam to step down.

“Hong Kong people have been lied to so many times,” said Bonny Leung, a leader of the Civil Human Rights Front, one of the groups that has helped organize the demonstrations.

The group urged people to continue to attend the scheduled protest in Victoria Park on June 16.

It also condemned the Hong Kong government’s labeling of protesters as “rioters” and called for the release of all 11 protesters who have been arrested.

The group added that it would continue calling for the “three suspensions”: boycotting classes, not going to work, and shutting down businesses until the bill is withdrawn.

Refusal to Step Down

Speaking to reporters after announcing her decision Saturday, Lam sidestepped questions over whether she should quit.

When a reporter pointedly asked Lam why she would not step down after the massive public protests and police violence, Lam responded: “I have been a public servant for nearly 40 years. I take it as my pride, and I still have a lot of work for Hong Kong that I hope to do.”

She also insisted on not withdrawing the proposed amendment and defended the police’s use of force, saying the response was “reasonable and natural.”

Lam also said the decision to suspend was made by her, and not Beijing, although the Chinese regime’s central government supports her decision.

Earlier in the week, Liu Xiaoming, Chinese ambassador to the United Kingdom, told the BBC that the Chinese regime gave no instructions to the Hong Kong government regarding the bill, an indication, analysts say, that the regime was attempting to distance itself from the controversy.

The Chinese government office in charge of Hong Kong affairs expressed “support, respect, and understanding” of Lam’s decision to suspend the bill.

Steve Tsang, a political scientist at SOAS University of London told Reuters that Beijing had most likely ordered Lam to postpone the bill.

“They would have indicated to Carrie … that this just has to end. She didn’t understand what she was doing,” he said.

“I think Carrie Lam’s days are numbered … Beijing cannot afford to sack her right away, because that would be an indication of weakness.”

Since Hong Kong’s reversion to Chinese rule in 1997, the city has been governed under a policy known as “one country, two systems” which guarantees it special autonomy and freedoms, including freedom of assembly, freedom of the press, and an independent judiciary.

Critics, however, say this promise has gone unfulfilled, citing a long list of developments that have eroded the city’s independence and legal protections, signaling the Chinese regime’s growing encroachment.

Recent incidents include refusing to renew a visa for British national and Financial Times editor Victor Mallet, democracy activists being jailed, and opposition lawmakers being disqualified from public office.