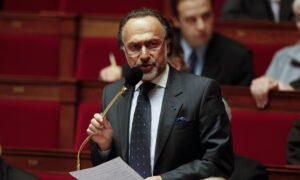 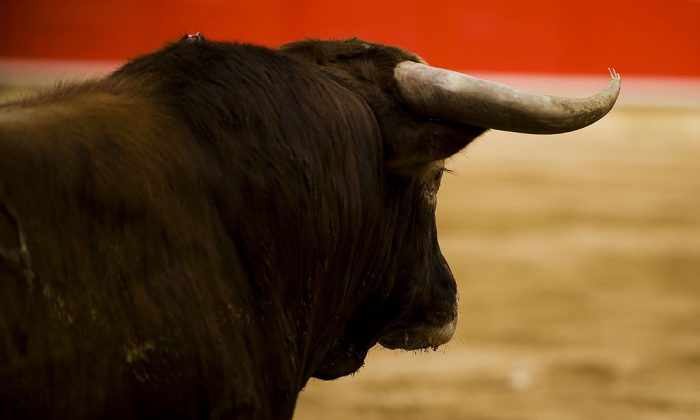 A bull is seen during a bullfight. (Photo by David Ramos/Getty Images)
Europe

Activist Trying to Protest Bullfight Gets Gored by Bull

A man tried to jump into a bullfight in Carcassone, southern France on Aug. 27 intending to protest, but instead found himself running unsuccessfully the other way from the bull.

As video footage from the Facebook page of L’Animal est une Personne shows, not long after the bull entered the ring, the protesters did too. The bull easily caught up with one of them with his horns pointed forward, charging the man and flinging him into the air, and then charging him again as he lay on the ground injured.

His female companion was not injured. For some reason the bull went after the man but not her. After the man was first charged, multiple matadors jumped in the ring to distract the bull, keeping the man free from further danger. He was eventually dragged to safety by one of the matadors.

The couple jumped into the ring during the “novillada,” which are fights involving younger bulls. Police said the 30-something man received a “a long but not deep” goring from the bull’s horns. The woman remained free from harm, but was arrested following the incident, as The Local reported.

Bullfighting is a tradition in southern France, although it is banned in other parts of the country. Earlier this month, at the five-day Bayonne Festival, there was another activist, who jumped into the ring topless.

On his chest was written a message in French, for President Emmanuel Macron. It said, “Macron, you can stop this.” A sign in his hand read ‘No to the Corrida (bullfighting tradition), save the bulls—Vegan strike group’. He shouted slogans “Macron, are these our traditions?” and “Do not confuse barbarism with tradition.” He was caught and quickly escorted out of the arena by numerous matadors and staff, as video footage from Vegan Strike Group shows.

He is a 34-year-old man from the Netherlands who has protested in similar ways at 30 bullrings and dolphinariums in France. He was arrested and then released by police. Just a few days before, he jumped into a bullring at another location in southern France, as The Local further reported. The Vegan Strike Group has a bull and dolphin within its logo.

“Bullfighting in general is perverse, it’s sadism, and it’s incredible that in the 21st century there is still entertainment based on stabbing animals to death,” said the vice president of CRAC Europe (The Radical Committee Against Corrida), a leading anti-bullfighting organization.