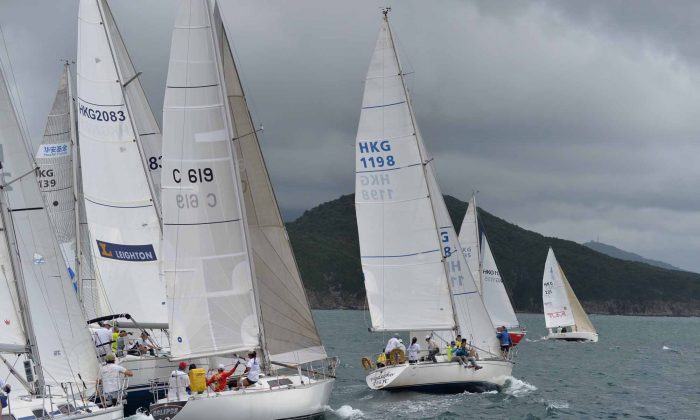 The Hebe Haven Typhoon Series lived up to its billing as one of the top race series on the Hong Kong racing calendar with an action packed afternoon on Day-2 of this nine race series.

With easterly winds gusting between 9 and 17 knots, Race Officer Inge Strompf-Jebsen set an exhilarating geometric course for all boats, with the faster ones completing three laps and the slower ones two laps, in each of the two races.

With almost 70 boats in play, it was always likely that there would be skirmishes. With four starts and up to 20 boats per start, there was a lot of excitement and jockeying for positions at the starts, during the races and near the finish line.

Numerous protests were lodged during the races, the results of which may cause changes to the provisional results set out below.

‘Mandrake,’ returning from the Koh Samui Regatta, chalked up wins in both of the IRC-A races, moving her up to fourth in the overall series standings. However, ‘Ambush’ still leads the series with three second place finishes.

‘FreeFire,’ also back from a successful Koh Samui Regatta, took line honours in both of the races and secured a third place in Race-3, but was pushed down to 16th position in Race-2. Disappointingly, ‘Jelik’ did not take part in Race Day-2.

‘Ambush’ picked up two second place finishes to keep her ahead in the series. ‘Mojito’ also performed well, posting a third and fourth place to maintain her second place in the standings.

The start of Race-3 of the IRC-A division was particularly robust with three boats, ‘Ambush,’ ‘Elektra’ and ‘Signal’ 8 being declared OCS (on course side) at the gun. Boats to their leeward maintained their course and the only alternative was for some boats to go OCS. ‘Ambush’ responded and re-crossed the line, but ‘Electra’ and ‘Signal 8’ did not respond to calls and were later declared OCS collecting 21 points each.

‘Ambush’ sailed brilliantly to make up time and to finish second on corrected time.

The perennial IRC-B star performers ‘Red Kite II,’ ‘Vixen’ and ‘Whiskey Jack’ again each picked up one of the first three places in each of the two races.

‘Whiskey Jack’ leads ‘Red Kite II’ and ‘Vixen’ in the series standings, but there are only two points between 1st and 3rd place. Meanwhile, ‘GearBox,’ ‘Talking Head,’ ‘Dexter II’ and ‘Rampage’ are 10 points adrift of the top three.

Meanwhile in IRC-C ‘Impala,’ old favourite ‘Impala 1’ continued her winning form in this division with two more successes. ‘Taxi’ is second, 5 points behind on 8 points, with ‘Moll,’ ‘Boss Hogg’ and ‘Also Can’ just a few points further back.

The HKPN division is still wide open with no boat stamping her mark on the series. ‘Cutting Edge’ took line honours in each of the two races, but it was ‘Ex Libris’ with a win and a second place on corrected time that fared best in these geometric races.

All boats have had mixed results to date, but ‘Scintilla’ coming second in Race-2 and sixth in Race-3, is still leading the series from ‘GA,’ with ‘Ex Libris’ in third—but only by two points.

The addition of Magic 25 ‘FreeFire It’s My Pleasure,’ to the Sports Boat category for this year’s Typhoon Series, is adding another dimension to the competition. Normal leaders ‘Merlin,’ ‘Fly By Wire,’ ‘Side Winder’ and ‘R2B2’ are finding winning more difficult. ‘FreeFire It’s My Pleasure’ nailed wins in Races 2 and 3 after finishing way down the order on Race Day-1.

‘FreeFire It’s My Pleasure’ won Race-2 convincingly from R2B2, with ‘Fly By Wire’ in third spot and ‘Merlin’ in fourth place.

‘FreeFire It’s My Pleasure’ used some strong arm tactics and determined sailing close to the finish line in Race-3, forcing Steve Bourne in ‘Merlin’ to change course at short notice to avoid a collision. Both boats were sailing at high speed and approaching the finish line on converging courses and it was looking to be a close call for the win. But after that incident, ‘FreeFire It’s My Pleasure’ lived up to her name and crossed the line with a 3-second advantage.

Meanwhile, new crew of ‘Black Magic’ are still getting used to their boat. ‘R2B2,’ although coming second in Race-3, seems to be missing the competitive skills of Dion Houghton, who has moved up with the “big boys” and is now sailing in IRC-A on the ‘MC38 HuaAn,’ the rejuvenated ‘Tornado 2.’