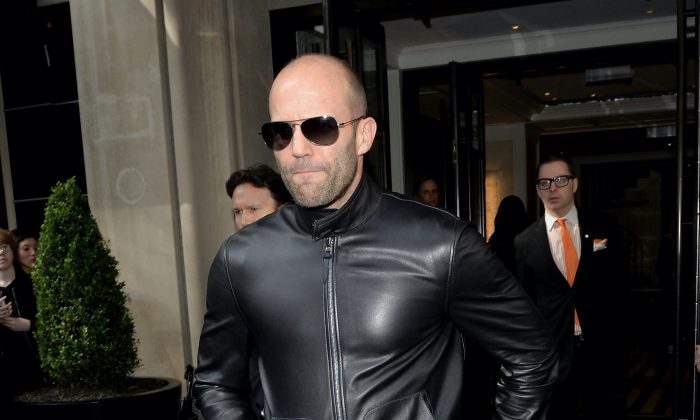 Actor Jason Statham leaves from The Mark Hotel for the 2016 "Manus x Machina: Fashion in an Age of Technology" Met Gala on May 2, 2016 in New York City. (Andrew Toth/Getty Images for Mark Hotel)
UK

An English actor who is well known for his roles in action-thriller movies spoke on July 24 about an “awful” accident that left a professional stuntman with serious injuries during filming for a popular action movie.

“It’s awful for the families when someone gets really hurt,” Statham said in a televised interview with Extra.

Production for the movie has been postponed since the accident happened at the Warner Bros. Studios in Leavesden, 35 miles northwest of London. Watts is recovering from a “serious head injury” and is in an induced coma, according to The Hollywood Reporter.

Hertfordshire Police told The Associated Press that the victim suffered “serious injuries” and had to be airlifted to hospital.

Production of ` Fast & Furious 9’ in England is halted after a stuntman for the action movie is severely injuredhttps://t.co/kk1yDMeZ2O

Statham described the movie stunt business as an “unpredictable science.”

“You do every measure that you can to eliminate these things from happening, it’s just a real shame that accidents happen,” he said.

He revealed his deepest admiration for stunt people who work behind the scenes and called them “unsung heroes.”

“They put themselves out there to make other people look good without [getting] anything back,” Statham said, according to Fox News. “The best relationships I have, and the most fun I have ever had on a set, is always with the stunt guys.”

Statham is no stranger to performing stunts himself, having had his fair share of action when he starred in The Transporter movie back in the year 2002.

Jason says he is closest to the stuntmen on set. https://t.co/HanUXHI33G

“Every year, there are petitions and movements to get the academy to add a stunt performer category to the Oscars and every year, they are ignored,” Contributor Huntress said on Facebook.

“Imagine if the actors had to do their own work, imagine dangerous action sequences never existing because there are no stunt performers … movies would be pretty damn boring, wouldn’t they?”

Fast & Furious 9 also stars Michelle Rodriguez and is promised to be released sometime in the year 2020.