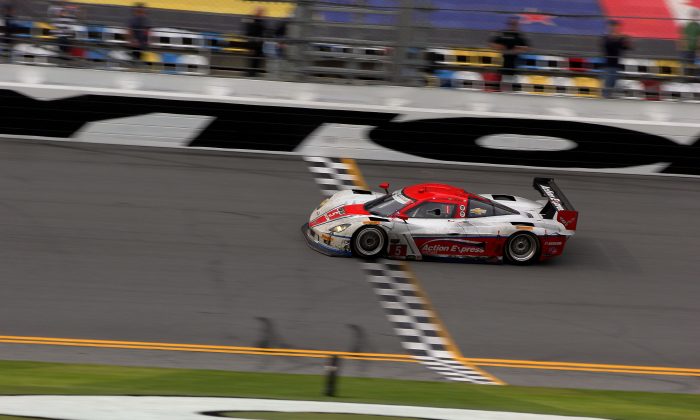 The #5 Action-Express Coyote-Corvette driven Joao Barboso, Sebastian Bourdais, and Christian Fittipaldi had been among the fastest cars at the Roar Before the 24 test, and Rolex 24 practice, and led much of the race, but was pressed hard in the closing hours by the #10 Wayne Taylor Racing Dallara-Corvette.

Barbosa, who drove the final stint for Action Express, pushed hard in the final few hours to open a 15-second gap over WTR driver Max Angelleli. That gap was erased by a caution period 21 minutes from the 24-hour mark—when the race went green with eight minutes to go, Barbosa had to fight off a charging Angelleli for four laps.

The final margin of victory was 1.46 seconds—a ridiculously slim advantage after 24 hours of racing.

It was the second win for Action Express, which won the 2010 Rolex, the team’s first race. Joao Barbosa drove in that first win; Christian Fittipaldi won with a different team in 2004.

“It’s one of those historic races that you just want to put on your resume,” Bourdais said at the post-race press conference. “It’s done today, and it was done fighting hard for it and it really feels good.”

The second Action Express car, the #9, was run cooperatively with European sports car team ADR-Delta, which supplied drivers Fabien Giroix and John Martin. The #9 car led at different points during the race but ended up being just a little bit less quick. The team had hoped for a one-two finish but was happy enough with the win and the podium.

The margin of victory here was relatively enormous: 2.8 seconds.

The other half of Core Autosport’s personnel operated the #54 PC Oreca, which won the PC class bya full lap over the #25 8Star entry.

Level 5, in its first Rolex and first race in GTD Ferraris, scored a class win with the #555 driven by Bill Sweedler, Townsend Bell, and team owner Scott Tucker.

Level 5 was locked in a tight battle with the 45 Flying Lizard Audi through the final half-hour, with the Lizard car closing ground quickly as the minutes ticked away.

The late-race caution cut the gap between the two significantly, and with one lap remaining Audi factory driver Markus Winklehock was able to get alongside the Ferrari, driven by Sweedler, exiting the Bus Stop chicane.

Sweedler held his line, which left very little room for Winkelhock. The Audi driver tried to get by anyway, but went off-course, losing a few seconds. The Level 5 car crossed the finish line first—but then Race Control announced a time penalty for not leaving racing room, giving Flying Lizard the win.

Several hours later, after thoroughly analyzing the video of the incident, Race Control ruled that Sweedler had not acted wrongly and Level 5 Motorsports was awarded the GTD class win.

Scott Tucker, Bill Sweedler, and Townshend Bell missed out on the podium ceremony, TV interview, and post-race press conference, but they still got the win, the points, the trophies, and of course their Rolex watches.

TUSC’s next event will be the Twelve Hours of Sebring, March 15. Visit IMSA.com for tickets and more information.