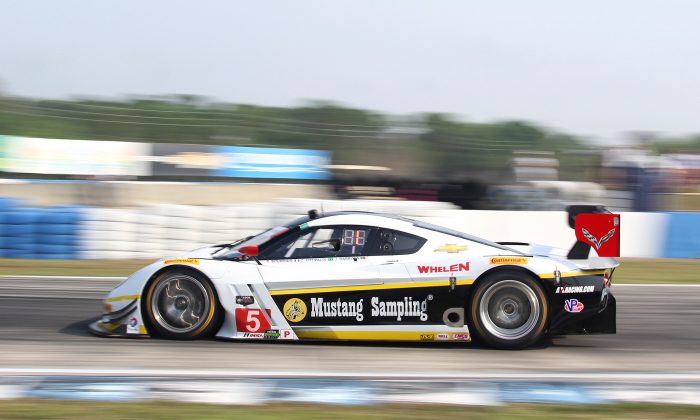 Action Express veteran Joao Barbosa was quickest in that team’s #5 Coyote-Corvette, lapping Sebring’s 3.74-mile, 17-turn track in 1:52.485. This car won the pole in 2014 with a lap if 1:51.917 by Sebastien Bourdais—who, with Christian Fittipaldi, share the car with Barbosa again this year.

Barbosa was more than a second quicker than Oswaldo Negri in the #60 Shank Ligier Honda.

Third and only 13 hundredths behind Negri came ex-F1 pilot Nic Jonsson in the #57 Krohn Ligier-Judd, a car which had been reputed to be down on power at Daytona. Either the team found some horsepower of the car simply works better at Sebring.

Jonsson was a mere four-hundredths quicker than Max Angelelli in the #10 WTR Dallara-Corvette.

Disappointment of the day award goes to the #0 DeltaWing DWC13 which completed only five laps. Apparently the pounding of the bumpy Sebring track was too much for its new lightweight transmission.

BMW took top honors in GT Le Mans, beating both factory Porsches, the Falken Porsche, and the #3 Corvette—all of which lapped within six-tenths of a second of the #25 Z4-GTE of Dirk Werner. Werner lapped the circuit in 1:59.496, 0.035 seconds quicker than Richard Lietz in the #911 Porsche North America RSR, who barely Beat Bryan Sellers in the #17 Falken Tire RSR.

Colin Braun in the #54 Core Autosports Oreca-Chevrolet was quickest in Prototype Challenge by almost a second—a wide margin compared to the gaps between the next five cars in the class.

Mario Farnbacher in the #23 Team Seattle/Alex Job Racing/Heart of Racing Porsche 911 GT America led the GT Daytona field with a lap of 2:03.455.

Tickets for the 63rd Twelve Hours of Sebring can be purchased at the gate or through Sebring Raceway‘s website.

For those who cannot attend, the race will be televised/streamed:

Fox Sports Two picks up the action at 10 p.m. and broadcasts the end of the race and winners’ interviews.