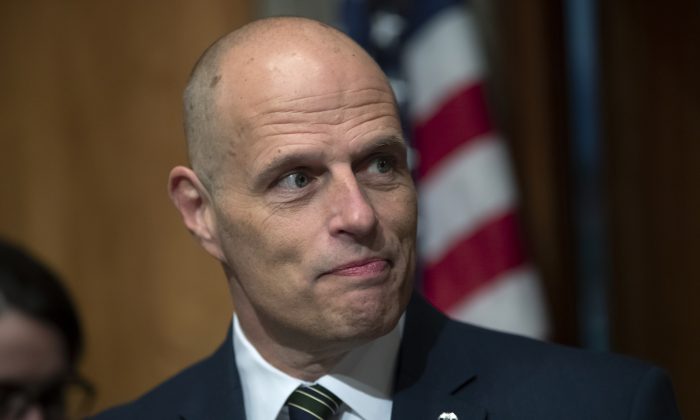 Ronald Vitiello, the nominee to become assistant secretary of Homeland Security for Immigration and Customs Enforcement (ICE), appears for his confirmation hearing before the Senate Homeland Security and Governmental Affairs Committee Committee, on Capitol Hill in Washington, on Nov. 15, 2018. (AP Photo/J. Scott Applewhite)
US News

The acting head of Immigration and Customs Enforcement (ICE) has apologized for once tweeting that the Democratic Party should be renamed the “NeoKlanist” party.

Ronald Vitiello, who has been nominated to be assistant Homeland Security secretary for Immigration and Customs Enforcement, made the apology in testimony before the Senate Homeland Security and Governmental Affairs Committee on Thursday, Nov. 15, as members deliberated whether to confirm him as head of ICE.

Vtiello told senators he understood the gravity of his remarks and assured the Committee members he did not intend to cause offense.

“It was meant as a joke I wasn’t trying to do anything other than make a joke. I regret it,” he said.

Vitiello was pressed by Sen. Gary Peters (D-Mich.) about the 2015 tweet he had sent in reply to a message to conservative talk show host Mark Levin, in which the ICE head nominee suggested the Democratic Party should be called the “liberalcratic party or the NeoKlanist party.”

Sen. Kamala Harris (D-Calif.), a likely 2020 presidential candidate, questioned Vitiello on the perception of ICE that it uses arrests to cause fear and intimidation among immigrants, particularly those from Mexico and Central America.

Harris sparked outrage and charges of “disgusting” partisanship when she suggested that the way some people perceive ICE’s use of power is comparable to how the KKK used “fear and force” to effect political change through terror.

Parallels Between ICE and KKK?

“Are you aware of the perception of many about how the power and the discretion at ICE is being used to enforce the laws?” Harris asked. “And do you see any parallels [with the KKK]?”

“I do not see any parallels between sworn officers and agents,” Vitiello responded.

“I do not see a parallel between what is constitutionally mandated as it relates to enforcing the law,” he said after a back and forth with the Senator.

“I see no perception that puts ICE in the same category as the KKK. Is that what you’re asking me?” Vitiello eventually said after the Senator repeatedly asked him to acknowledge similarities between perceptions of the KKK and ICE.

Harris’s comparison sparked outrage, with RNC Chairwoman Ronna McDaniel blasting the California Senator for “disgusting” partisanship. “Kamala Harris is trying to launch her 2020 campaign off of comparing ICE officers to the KKK, and it’s absolutely disgusting,” she tweeted.

Kamala Harris is trying to launch her 2020 campaign off of comparing ICE officers to the KKK, and it's absolutely disgusting. pic.twitter.com/l6DrpbbQ2k

“What utter, complete & horrifying disrespect for our law enforcement officers. I get she’s auditioning for 2020, but come on…,” wrote GOP spokeswoman Kayleigh McEnany.

This is appalling. 2020 hopeful Kamala Harris just compared ICE to the KKK!

What utter, complete & horrifying disrespect for our law enforcement officers. I get she’s auditioning for 2020, but come on… https://t.co/JbHmG55cX1

Vitiello, who has been a law enforcement agent for more than 30 years, is vying to become the head of an agency that has received intense backlash from a number of progressives.

Some progressive Democrats have called for ICE to be abolished altogether and have criticized the 15-year-old agency for its role in carrying out the Trump administration’s “zero tolerance” policy with respect to illegal immigration.

“Words have consequences, especially considering comments you acknowledged you were inappropriate,” Jones said. “I want to make sure you will stand up and do the right thing.”

“If confirmed, one of my highest priorities will be to better demonstrate to the public, Congress, and the media the importance and criticality of the mission to protect the homeland and improve public safety—and why our agency’s existence should not be up for debate,” Vitiello said.

Vitiello also said that “all of the people that we encounter deserve fairness, dignity, and respect in the encounters with our agents and officers.”

The committee is expected to vote on his nomination after Thanksgiving.