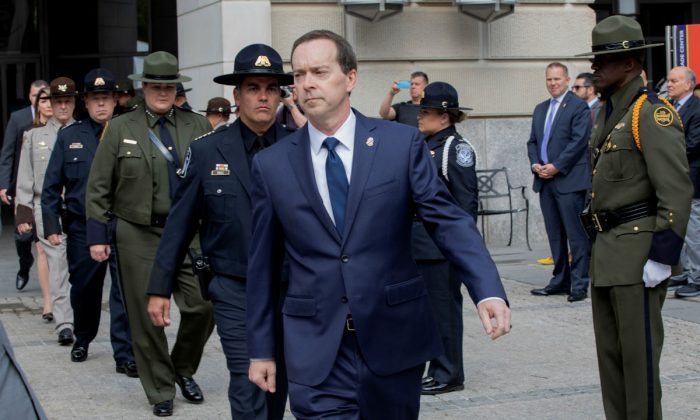 Acting Customs and Border Protection (CBP) Commissioner John Sanders has resigned and will leave his position on July 5.

Sanders has been acting as head of the border agency since April when Kevin McAleenan was picked to take over as Acting Secretary of Homeland Security.

Sanders told CBP employees on June 25 that he had offered McAleenan his resignation the day before and would officially leave his post on July 5. He didn’t provide an explanation as to why he was leaving, reported Fox News.

“Although I will leave it to you to determine whether I was successful, I can unequivocally say that helping support the amazing men and women of CBP has been the most fulfilling and satisfying opportunity of my career,” he said, according to the news broadcaster.

This announcement comes as Sanders and other immigration officials recently faced intense criticism over the border agency’s treatment of detained illegal immigrant children after attorneys who visited a border patrol station in Texas publicly described its condition.

The attorneys, who made the trip to the Border Patrol station in Clint on June 20, said at least 250 children were detained in dirty and overcrowded conditions with inadequate food and lack of medical care. Most of the children have since been relocated to children’s shelters.

CBP has repeatedly warned that the influx of family units from Central America in recent months has overwhelmed border patrol facilities and resources and created a humanitarian crisis. In May, border patrol agents detained more than 132,000 people crossing from Mexico—the highest level over more than a decade. Moreover, during the first seven months of the 2019 fiscal year, 531,711 illegal immigrants crossed the border into the United States, according to CBP data.

The news also comes after House lawmakers are struggling to pass a $4.5 billion funding bill to address a surge of illegal immigration at the southern border. The White House issued a statement (pdf) on June 24 stating that House Democrats had “put forward a partisan bill that underfunds necessary accounts and seeks to take advantage of the current crisis by inserting policy provisions that would make our country less safe.”

It explained that neither the House nor Senate bills include necessary funding for Immigration and Customs Enforcement (ICE) detention and also contains several policy provisions that would hinder the administration’s efforts to enforce immigration laws and protect children. The Trump administration warned that it would veto such a bill if passed.

President Donald Trump said on June 25 that he was “very concerned” about conditions at migrant detainee facilities. He also criticized Democrats for, in his view, blocking a border supplemental bill even as House leaders work to get a bill passed.

Before Sanders took over as head of CBP, he served as the chief operating officer. He had also been the Transportation Security Administration’s chief technology officer, according to his biography on the CBP website.

The is a developing story. Please check back for updates.