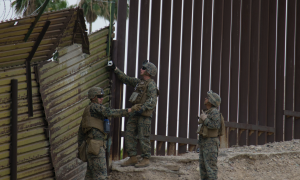 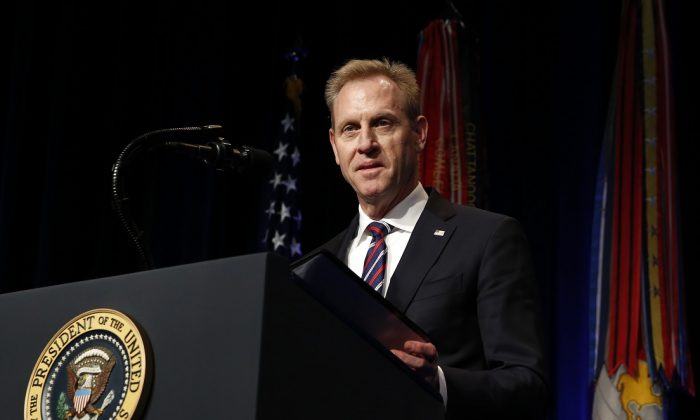 WASHINGTON—The nation got a formal introduction to the man some consider likely to permanently succeed James Mattis at the Pentagon, as acting Defense Secretary Patrick Shanahan held his first press briefing on Jan. 29.

In a brief but wide-ranging question-and-answer session with reporters, Shanahan addressed everything from current U.S. military operations, to the president’s use of the military at the U.S.–Mexico border, to his job status. On the border, Shanahan expects the deployment of several thousand new troops.

On using the military at the U.S.–Mexico border, Shanahan framed the Department of Defense’s (DoD) role as one of “support.” He described conversations with new House Armed Services Committee Chairman Adam Smith (D-Wash.), saying that Smith seeks “transparency and oversight” and to “understand the policy” as it relates to U.S. military support at the border and to the Department of Homeland Security (DHS). Shanahan emphasized the military’s role as providing logistical support, not law enforcement.

In response to the possibility of Trump declaring a national emergency regarding the border, Shanahan said that declarations of national emergencies aren’t “unique or unprecedented.” In the event of a national emergency, DoD would make a recommendation on how to provide support, he said, pointing out “monitoring, surveilling, and detecting” as examples of “enhanced capability that we provide to DHS.”

He said current DHS requests to DoD would result in the deployment of “several thousand” personnel to the border. Regarding the use of military funds for constructing border barriers or walls, Shanahan paraphrased legal authority (10 US Code § 2808) that in the case “a national emergency is declared … to enhance the capability of the military, military construction funds can be utilized.”

However, Shanahan pointed out that existing military funds for construction “were appropriated for specific tasks.”

He observed that the main change from his previous role as deputy secretary was in his amount of interaction with the rest of President Donald Trump’s cabinet, the president himself, and his counterparts in Europe and Asia.

“No change to priorities, no change to strategy. It’s really, ‘go faster on the implementation and the execution,’“ he said, noting specifically the issue of “how we balance our time between Russia and China.”

Addressing the U.S. withdrawal from Syria, Shanahan called it “disciplined, coordinated, deliberate.” He stated that in Syria “ISIS is no longer able to govern … no longer has the freedom to mass forces … no longer has a safe haven,” as the United States has eliminated the majority of its leadership, diminished its financial capabilities, and decimated its “once-vaunted social media.”

Ninety-nine percent of ISIS-controlled territory in Syria has been returned, and that may rise to 100 percent “in a couple of weeks,” which has led to the “risk of terrorism and mass migration” being mitigated.

He also said that “military-to-military” conversations were ongoing with regard to northeastern Syria, which he believed “hold real promise.” Northeastern Syria is an autonomous enclave that includes the Kurds, who have been instrumental in fighting the ISIS terrorist group, but are regarded by Turkey as enemies.

Turning to Afghanistan, Shanahan said there was no change to the “4R-plus-S plan” (regionalize, realign, reinforce, reconcile, and sustain). Noting the new discussions between Ambassador Zalmay Khalilzad (the State Department’s special representative for Afghanistan reconciliation) and the Taliban, he saw the present role of U.S. forces as giving “diplomats time and space to advance those conversations.”

He said that a candidate had been selected to lead Space Command, but wasn’t ready to release the name. He characterized his discussions about Space Command with Pentagon leadership and members of Congress as “how do we go faster with commercially available technology,” while not growing bureaucracy and costs.

With respect to the Venezuelan leadership crisis, Shanahan noted that the departments of State and Treasury have taken steps “to recognize the National Assembly and President Guaido” of Venezuela. Responding to reports of national security adviser John Bolton recommending 5,000 U.S. troops be deployed to the region, Shanahan said, “I haven’t discussed that with Secretary [sic] Bolton.”

Pressed further, he added, “I’m not commenting on it.”

He addressed his “acting secretary” status, saying that it “hasn’t made a difference” in his interactions. In response to any potential bias he may bring as a former Boeing executive, he answered his bias was toward “giving the taxpayer their money’s worth.”

As far as remaining Secretary of Defense (presumably dropping “acting” from his present title), Shanahan answered, “whatever the president or the country would like me to do, that’s what I’m prepared to do.”