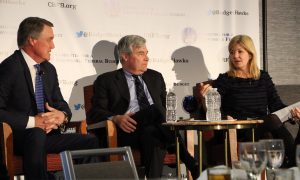 WASHINGTON—The acting White House budget chief said approving the new spending agreement was tough for President Donald Trump, adding that the deal “serves the country well in this moment” but came at a “substantial cost.”

Congressional leaders and the White House agreed on a two-year budget deal that increases federal spending and raises the government borrowing limit.

Trump welcomed the deal on Twitter, calling it “a real compromise” to fund the U.S. military and veterans.

If passed by Congress, the deal will raise discretionary spending by about $40 billion in fiscal year 2020, from the current level, and nearly $320 billion in the next two years over existing caps put in place by the 2011 Budget Control Act. The agreement will also suspend the debt ceiling until the end of July 2021. Fiscal conservatives oppose the deal, asking Congress to restore “fiscal sanity.”

“We got a deal that we think in the moment serves the country well but comes at some cost, for sure,” Russ Vought, acting director of the Office of Management and Budget, told The Epoch Times in an interview for the American Thought Leaders 🇺🇸program.

Fiscal conservatives are “doing the hard work of sounding the alarm bells,” he said. “The concerns that they’re raising about the cost of the deal and the impact to the fiscal picture are not invalid.”

The new deal doesn’t allow legislative riders that would block the administration’s deregulatory initiatives and the border wall funding, according to Vought. In addition, Democrats wouldn’t be able to use poison pills to roll back pro-life protections.

“The debt limit was something that needed to be extended. We negotiated for about five months since we produced the budget. We got to a result that is certainly a compromise. It spends way too much,” he said. “But it also has some important concessions from the Democrats, in which they’re surrendering their arms to add new poison pills to the eventual appropriations bills.”

Trump on July 23 urged lawmakers on both sides of the aisle to support the deal.

“Budget Deal gives great victories to our Military and Vets, keeps out Democrat poison pill riders,” he wrote on Twitter. “Republicans and Democrats in Congress need to act ASAP and support this deal.”

The conservative House Freedom Caucus, however, took an official position on July 23 opposing the deal. Trump’s closest allies in Congress, Reps. Mark Meadows (R-N.C.) and Jim Jordan (R-Ohio) are among the members of the group.

“Our country is rapidly approaching $23 trillion in debt. We should be negotiating a responsible budget that serves taxpayers better—not raising spending by $323 billion with no serious offsets,” the group said on Twitter.

The budget deal increases the deficit, adding roughly $1.7 trillion to the national debt over the next decade, according to estimates by the Committee for a Responsible Budget.

The new budget deal forsakes steep spending cuts initially proposed in the president’s budget resolution. That proposal aimed to cut the budget deficit by about $2.7 trillion over 10 years and balance the budget in 15 years.

“This president has put forward more spending reductions than any president in history,” Vought said. “Are we ever going to get to a point where we get a bipartisan appetite to consider those? My view is that we will, but it’s going to take some time, and there needs to be a good part of that conversation about what the fiscal goal is.”

Within 10 days of taking office, Trump ordered his administration to slash regulatory hurdles. He signed an executive order that required two past rules to be removed for every new regulation proposed.

So far, the administration has managed to slash 13 regulations for every new regulation, far exceeding Trump’s order. The red tape reduction plan has provided $33 billion in savings to the parties affected by the regulations, Vought said.

As a result of these regulatory reforms, household income is projected to increase by $3,100 a year, on average, within five to 10 years, according to a report issued by the White House Council of Economic Advisers last month.

This is a win for consumers and “really gets at the heart of the success of this president’s deregulatory agenda,” Vought said.

The deregulation efforts provide cost savings as they increase the choice, productivity, and competition for consumers.

‘A Breath of Fresh Air’

Separately, Vought praised Trump for his leadership, calling him “a breath of fresh air” in Washington.

“He absorbs information quickly. He is an incredibly quick study,” he said, adding that he makes decisions with confidence after consulting with many people.

“He empowers people both in the big jobs and in smaller jobs to present viewpoints to him, in his effort to get a real sense about what’s going on.”

Unlike previous presidents, he said, “this president works very hard to make sure he knows exactly what’s going on across the country and not just rely on the team that’s giving him information.”

He also praised Trump’s efforts to trim waste in the federal government.