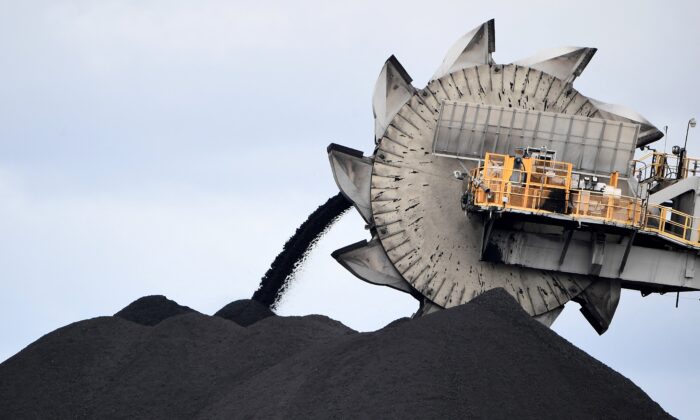 A bucket-wheel excavator dumping soil and sand removed from another area of the mine in Newcastle, Australia, the world's largest coal-exporting port, on Nov. 5, 2021. (Saeed Khan/AFP via Getty Images)
Business Columnists

Across the World, Coal Power Is Back

In the United States, coal consumption hit an all-time high in 2013, and soon after, almost every Wall Street bank and liberal activist declared coal as dead.

Still, coal energy was the dominant form of energy in the United States until 2016, and this year, global coal consumption is set to reach 2013’s record levels.

In February, central Appalachian coal production hit a two-year high. Now, the price of coal is rising to record levels in the United States and across the world.

Sounds like a tremendous amount of activity for an industry that has been declared dead.

First off, let’s be honest. Fossil fuels still account for much of America’s energy. According to the Energy Information Administration’s Monthly Energy Review: “Fossil fuels—petroleum, natural gas, and coal—accounted for 79% of the 97 quadrillion British thermal units (quads) of primary energy consumption in the United States during 2021. About 21% of U.S. primary energy consumption in 2021 came from fuel sources other than fossil fuels, such as renewables and nuclear.”

In other words, fossil fuels made up nearly 80 percent of all energy produced in the United States in 2021.

Earlier this month, CNBC reported on the continued coal consumption and price increases happening in domestic and global markets, stating: “Coal prices are soaring, and global coal consumption is expected to return to record levels reached almost 10 years ago as the global energy supply crunch continues. While investors in coal stocks are having a field day thanks to high coal prices, curbs on carbon emissions are taking a backseat as markets and governments scramble to stock up on traditional energy supply amid bottlenecks caused by the Ukraine war.”

At the moment, there are a number of issues at play, ranging from the need to ramp up domestic supply for domestic energy security, to a years-long slowdown in domestic and international production, and now lingering supply issues from the Russia–Ukraine war.

The ripple effect is being felt worldwide. International coal prices are also skyrocketing.

Mining and metals expert Pete O’Connor, at the Australian investment bank Shaw and Partners, recently commented on the tight coal market and price increases seen across the globe, stating: “And supply [of coal] is tight. Why? Because nobody’s building capacity and markets will remain tight given the weather and COVID. So that market will stay higher for longer, probably well into the 2023 calendar year.”

In addition, the International Energy Agency (IEA) stated in a recent coal market report: “After coal and power shortages led to high coal prices in October 2021, the Chinese government gave orders to boost domestic production, which reduced the need for imports. In the first six months of 2022, China’s coal production increased by 11%. At the same time, we estimate that its coal demand declined by 3%. As a result, coal imports fell by 18% year-on-year, to 115 Mt [metric tons]. For the full year, we expect China’s coal imports to decline by 18%, or 45 Mt. India also started 2022 with reduced imports, but government measures to prevent coal shortages will likely increase import volumes in the second half. Overall, we expect India’s coal imports to increase slightly compared with 2021.”

The IEA continued: “Indonesia, the world’s largest exporter of thermal coal, is also the most flexible. In 2021, it increased its exports by 27 Mt, to 434 Mt, exporting more than twice as much as Australia (199 Mt). The United States, a swing supplier in the Atlantic market, increased exports by 12 Mt, to 36 Mt.”

Perhaps the most important coal market news came in late July, when Bloomberg reported on a coal trade that could be one of the most expensive coal trades ever recorded in Japan. The deal was between Glencore and Nippon Steel, and the coal was sold at $375 per ton.

As Bloomberg reported: “Nippon Steel Corp. agreed on an annual supply deal through March with Glencore for power plant coal at $375 per ton, according to people with knowledge of the deal, who asked not to be identified because the information is private. The agreement is three times more expensive than similar deals done last year, and is likely one of the costliest coal contracts ever signed by a Japanese company.”

The bottom line remains: Thermal coal is back in demand, and that’s not changing for a while. Yes, coal is dirty, but it’s reliable. In fact, many believe that there’s a moral obligation to produce coal—the moral obligation being that we should mine for coal so others can have access to reliable power and energy.

After all, shouldn’t we look to utilize carbon capture in abandoned coal mines? Should we not find a way to filter flue gas from coal-burning power plants instead of flipping off the switch?

What’s the point of destroying the coal-mining industry, and taking thousands of jobs with it, if you’re still supporting industries that cause harm to the environment?

These radicals—in my opinion—opportunistically fail to see the destruction caused by the manufacturing of renewables, which includes toxicity from lithium-ion batteries, wind turbines killing thousands and thousands of birds, and solar panel fields taking huge swaths of land for energy that only provides power during sunny days.

If there’s a middle ground to be found here, it will be using profits from fossil fuels to pay for the research and development of less harmful forms of energy.