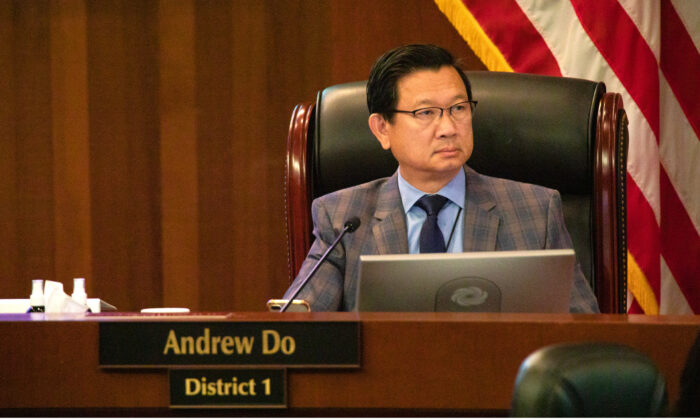 Supervisor Andrew Do attends a meeting of the Orange County Board of Supervisors in Santa Ana, Calif., on Aug. 25, 2020. (John Fredricks/The Epoch Times)
Southern California

SANTA ANA (CNS)—The Orange County Board of Supervisors voted Jan. 12 to approve a settlement with the American Civil Liberties Union (ACLU) that will make some minor changes in the public speaking rules at the board’s meetings.

The ACLU filed the lawsuit in 2019 on behalf of the People’s Homeless Task Force OC. The lawsuit alleged that the board’s rules that speakers must provide their names and direct their comments to the chair of the board and not individual supervisors violated the state’s law on public meetings known as the Brown Act as well as the state and federal constitutions.

“Orange County’s supervisors were treating their meetings like something out of a monarchy,” said ACLU attorney Peter J. Eliasberg. “It was a royal court where criticism directed at individual supervisors could not be heard. This was clearly unlawful.”

The ACLU said requiring speakers to provide their name had a “chilling effect on political speech.”

Michael Robbins, president of the People’s Homeless Task Force OC, said, “The Orange County Board of Supervisors has a history of suppressing public comment, which continues to this day. With the settlement of this lawsuit, our organization expects that, to some extent, future public comments are permitted and respected.”

Orange County Board Chairman Andrew Do said it was worth it to just settle the lawsuit.

“We just have to move on,” he said. “There’s so many important tasks for us, especially in this [COVID-19] crisis with so much going on and people depending on us to keep things going and to open up the economy. We can’t just let a few people distract us from the work at hand.”

The board meetings routinely attract multiple gadflies, many of whom have gotten more caustic in recent months with personal insults and profanity.

There are also more emotional appeals from residents who did not previously attend meetings with calls for the board to reopen the economy, which isn’t under its power to do without the state’s consent.

Do also noted that some of the board’s critics have taken a racist tone at times with comments that the Asian-American supervisors don’t understand democracy.

“Caustic I can take, but outright racism, that is harder to take,” Do said. “When they make comments and hone in on the three non-white supervisors and make comments about us and say things like we don’t know democracy and things like that it’s obvious the intent is to be racist.”

Do praised Supervisor Don Wagner for criticizing racist slurs and race-baiting rhetoric made in past meetings.

“I face a little bit of a quandary—do I allow racists to basically chase me out of my own meeting or on the flip side do I really want to engage them or give them more credence than they deserve?” Do said.

“So I usually decide to stay to fulfill my role as a supervisor, but it does offend me.”