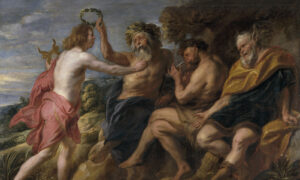 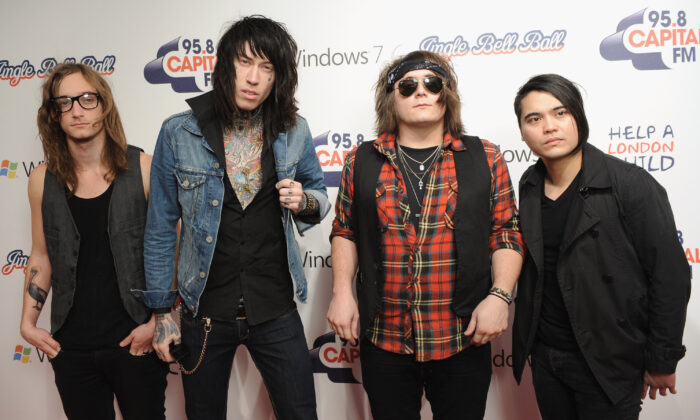 Despite starting his career in the music industry as a teenager and achieving stunning success after three years, Mason Musso was able to avoid the negative impact of his professional environment.

Musso’s career began at the age of 17 years when he co-founded the band Metro Station and became its lead vocalist and songwriter. When Musso was 18, the band released the hit song “Shake It” which peaked at #10 on the Billboard Hot 100 in the United States and at #2 in Australia, making Metro Station one of the top bands at the time.

“Too much money, too many vices,” Musso described his situation at that time. “It destroys a lot of people.”

“Hollywood entertainment people have their demons, and apparently they come out and catch up,” Musso said in an interview on Epoch Times’ Crossroads program.

A band usually receives a large budget from a record label to produce a music video, but production costs can actually be much lower and much of the money goes toward parties, Musso said. One time the band even rented an inflatable ball pit for a party, he added. There was no reason to have it but “stuff like that … just scales up, and up and up,” Musso explained.

But with the “strong support base of friends [and] family,” Musso quickly learned to balance his life.

The musician said that he likes to have a good time but he personally set a limit for himself. “I don’t want to be on this kind of dark road anymore,” Musso added. “I know plenty of people that still [use] drugs, alcohol, everything else.”

Musso gradually realized that he could be partying with the wrong people. Maybe those people wanted to hang out with him not because of who he is but because he was supplying their lifestyle, Musso said, adding that he also did not want to party every single weekend.

After pushing a musician to the top, record companies typically do not help them to deal with the excessive lifestyles that often come with success, Musso said. He compared the music industry to a machine that loves artists as long as they make money.

However, if a musician misses an interview or shows up drunk to work and spoils a live show, the record company will not tolerate compromising its business, Musso explained.

Musso realized that fame has an expiration date. “Usually it’s [like] you have your moment, just like a star or a supernova, you have your great explosion and then you kind of dim out,” although some bands are able to reemerge, he said.

As cancel culture makes its way to Hollywood, people in the entertainment industry get cut off and destroyed because they post certain things or like certain politicians, Musso said, using the example of Gina Carano, a star of “The Mandalorian” series. Carano was dropped by the production company and the agency she worked with over her political comments on social media.

“I don’t try to get political, but I try to write about current events, what’s going on in the world. I mean there are so many love songs you can write … as I’ve gotten older I kind of want to write about different things I’m seeing in the world.“ Musso said.

“I think it’s important to see what’s good, kind of see what people are feeling and try to reach people. That’s what music’s about, reaching people through your music so yeah that’s what I’ve kind of been at,” Musso continued.

“I believe that people have the right to express their opinions,” Musso said, “I don’t try to say crazy offensive stuff, but I think that we’re in a very polarized time right now and maybe we should listen to both sides a little bit, maybe that’s a good idea, rather than totally cutting people off.”

“A lot of people are starting to realize that this cancel culture—it’s the new inquisition,” Musso said.

Musso pointed out that there is a strong push for big government but he tries to walk a fine line. “I’ll listen to people on this side, listen to people on that side. If I disagree I’ll say so and if I agree I’ll say so as well, but I don’t think ‘you have to be over here, you have to believe these things, otherwise, you’re canceled.’ That’s not healthy, that’s going to get nowhere,” he added.

Exploring the Origins and Goals of Socialism

Musso identified himself as a classical liberal or center-right. He explained that he did not get pulled into the leftist side because he likes reading about history and exploring the origins of socialism and where its totalitarian ideas lead to. He found that a lot of these originated in France and two French post-modernist philosophers, Jacques Derrida and Michel Foucault.

“Maybe it’s better to kind of check it quick before it gets too crazy,” Musso added.

Derrida and Foucault belonged to a group of French philosophers who in the wake of the 1960s counterculture movement created what soon became the most powerful ideological weapon for Marxism and communism in the American academic community: deconstructionism.

Derrida’s theory of deconstructionism combines atheism and relativism and works by exaggerating the ambiguity of language to break down texts even where the meaning is clear and well-defined.

Unlike conventional atheists, Derrida expressed his views in the language of philosophers. As a result, his viewpoints are not only destructive to the idea of God, but also to the concepts of rationality, authority, and meaning as associated with traditional beliefs.

The essence of Foucault’s theory revolves around the notion that there is no truth, only power. Since those in power monopolize the right to interpret the truth, anyone who purports to know the truth is hypocritical and untrustworthy.

Foucault compared society’s institutions such as factories, schools, and hospitals as prisons and called on people to overthrow them, according to Roger Kimball, editor, publisher, and author.

The postmodern philosophy “came into vogue” in the 1970s, according to Jordan Peterson, Canadian clinical psychologist and professor of psychology at the University of Toronto, “after classic Marxism, especially of the economic type, had been so thoroughly discredited that no one but an absolute reprobate could support it publicly.”

“Even the French intellectuals had to admit that communism was a bad deal by the end of the 1960s,” Peterson told The Epoch Times in 2017.

Peterson said the “full breadth of that catastrophe” of communism is something students rarely learn in school. “The students I teach usually know nothing at all about what happened in the Soviet Union under Stalin and Lenin between 1919 and 1959. They have no idea that millions, tens of millions, of people were killed and far more tortured and brutalized by that particular regime—to say nothing of Mao.”

We should be against any kind of totalitarian ideas, Musso said.

“Don’t force people to believe what you believe, have your ideas, express your ideas. But the moment anyone tries to deviate from those ideas you’re going to cancel them, you’re going to remove them from society, or they’re going to lose their job—that’s not good,” Musso explained his credo.

The restrictions due to the CCP (Chinese Communist Party) virus pandemic have stalled Metro Station’s work on a new album and the band also had to stop touring, Musso said. The cancellation of tours and live concerts pose a big challenge to musicians across the world, forcing them to come up with new ways to interact with their fans.

Musso and other band members were quarantined and not able to see each other. Therefore Musso formed a new group with his friends from different bands.

Due to the pandemic restrictions, the new band’s members have never been able to meet in person but have created three new songs and produced a music video, Musso said explaining that the group was named Social Order after this “new social kind of order going on.”

The members of Social Order filmed the video from their homes on a very low budget without using lights and camera crews, Musso said. “You don’t need all the glitz and glamour to reach people.”

The last song Musso wrote, “All By Myself,” reflected on his feeling of loneliness when his quarantine was extended. “Obviously there are people that have had it way worse than me but I just kind of wanted to put down on paper what I was feeling,” he added.