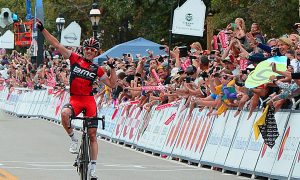 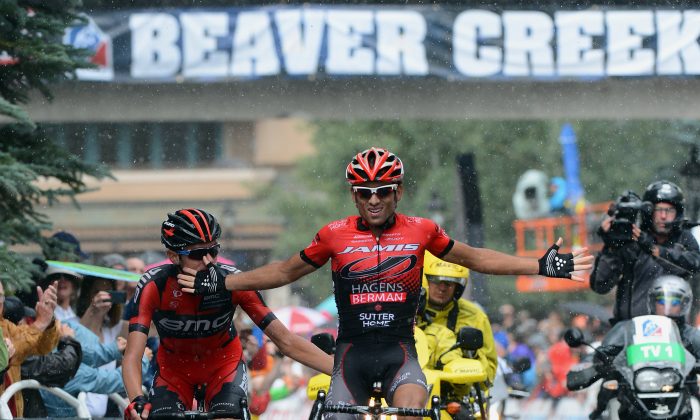 Janier Acevedo of Jamis-Hagens Berman celebrates as he wins the race just in front of Tejay van Garderen of BMC during Stage Four of the USA Pro Cycling Challenge on August 22, 2013 in Beaver Creek, Colorado. (Garrett W. Ellwood/Getty Images)
Cycling

Bontrager’s Janier Acevedo worked in tandem with BMC’s Tejay van Garderen to drop the rest of the field over the brutal Cat One Bachelor Gulch, and was rewarded with a stage win, while the BMC team leader took over as leader of the race in Stage Four of the 2013 USA pro Challenge Thursday.

“I was feeling very good during the week,” Acevedo told Cyclingnews.com through a translator. “I had a tremendous day today. I was feeling confident, and on the second-to-last climb when the guys started to go hard I knew I had the legs to win.

“I tried to go as fast as I could on the downhill, trying to take no risks on the corners, and then me and Tejay worked together to make it to the line.”

Acevedo and van Garderen talked a while before starting out on the flat leading to the final climb. “A little bit of deal-making going on,” van Garderen explained to NBCSN.

“He said, ‘Look, I’ll work with you but I want the stage. If you give me the stage I’ll work otherwise I’m just going to sit on.

“I said, ‘Okay.’ I was more interested in time than the stage so I made that deal.”

Tejay van Garderen is very ready for the uphill time trial. It was on the same course in 2011 that the then 23-year-old started the stage in yellow and finished the day in third, losing 46 seconds and a chance for his first big win as his body failed him.

“I’m confident going into tomorrow’s time trial, but nothing’s ever a given,” he told Cyclingnews. “I had a 35 second gap in 2011 going into that time trial, and I lost the 35 seconds and a further 11 seconds, so the thing I’ve learned is to not be too confident.

“I have to really pace myself tomorrow. I need to just keep my wits about me and try to manage the gap.”

Stage Four, 166 km from Steamboat Springs to Beaver Creek, was considered the Queen Stage of the race, with five categorized climbs and a summit finish. Garmin Sharp’s Lachlan Morton started the day in yellow two seconds ahead of BMC’s Mathias Frank, but both riders had strong team mates competing for the General Classification.

Morton knew he might have to defer to Tom Danielson or 2012 winner Christian Vande Veldem, while Frank’s desire for a win would come second to his team leader Tejay van Garderen’s quest for the overall podium.

The day started with Garmin leading the peloton, as expected, and a flurry of failed attacks, before a nine-rider break established itself five K into the stage. This group grew and shrank until after about 15 K it was settled. Bissell’s Jason McCartney worked intensely to catch this group, losing time to a bike switch but still bridging across finally after 40 km of chasing.

This group got the gap up to nearly five minutes before slowing, and with 59 km left in the stage, Siutsou attacked, splitting the break. Tony Gallopin, Lawrence Warbasse, Michael Rogers, and Davide Villella managed to stick with the Sky rider on the Cat Three State Bridge climb.

Tony Gallopin pushed the pace up the hill until only Siutsou, Rogers, and Warbasse were in the lead group with a 25-km to ride until the steep (ramps up to 18 percent) Cat One Bachelor Gulch climb.

Gallopin pushed hard, and three minutes back Garmin pushed just as hard to reel in the break before Bachelor Gulch. The RadioShack rider was only 41 seconds down on GC; if the break stayed away, Gallopin would have scored yellow.

Michael Rogers attacked the break halfway up Bachelor Gulch and managed to leave them all, while behind first Christian Vande Velde and then Lachlan Morton pulled what was left of the peloton—only eight riders were still in the yellow-jersey group, and that number shrank every few hundred meters.

Only four were left—Danielson, Acevedo, van Garderen, and Frank—when the group caught Rogers 14 km from the finish. Frank soon fell off and Tom Danielson attacked repeatedly, trying to shake van Garderen, knowing the BMC rider was probably stronger in the time trial. It didn’t work, and the trio crested the hill together.

Acevedo attacked as soon as they crested, and van Garderen followed. Danielson was a little more cautious, as the speeds were high, the road was wet, and the turns were sharp. “Those guys went really fast down that and I just couldn’t go as fast,” Danielson told Cyclingnews. “They were just taking risks and sliding all over the yellow line and everything. I just couldn’t do it.”

Danielson kept the two leaders in sight most of the way down the descent, but he couldn’t match their pace on the flat leading to the final climb. QWhen Acevedo and van Garderen hit the final 2-km, 3.7-percent grade to the finish line, Danielson was thirty second behind and out of hope.

To make matters worse, Mathias Frank caught Danielson 7.5 km from the finish, and passed him on the last hill. Frank finished 13 seconds behind the leaders, and Danielson nine seconds after that.

Meanwhile Lachlan morton had been leading a gourp of aboput eight riders in hot pursuit of the eladers. The 21-year-old Garmin rider couldn’t match the pace of his more experienced rivals on the climb, but once he caught his breath, he had plenty left to chase with.

Champion System’s Gregory Brenes attacked this group on the way to the line and crossed at 1:07. The rest came in at 1:28, which kept Morton in fifth place—not a podium, but a good result for a 21-year-old in his first pro season.