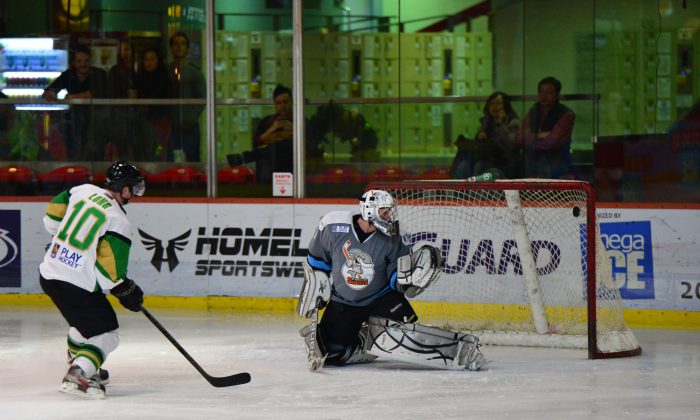 Christian Long extends the Macau Aces lead to 5-3 in their match with the South China Sharks in the CIHL at Mega Ice on Saturday Dec 7, 2013. (Bill Cox/Epoch Times)
International

Aces Push Further Ahead in the CIHL

Macau Aces moved further ahead in the China Ice Hockey League standings, while Hong Kong Tycoons caught up to South China Sharks after the completion of Round-7 at Mega Ice on Saturday Dec 7.

Andrew Alari and Brennan Sonne scored two goals apiece and Drew Barton scored one for the Hong Kong Tycoons in the first period against the Kowloon Warriors. Eric McKenna was the sole Period-1 scorer for the Warriors, leaving the score a devastating 5-1 at the end of the opening stanza.

The Warriors tightened up their defense in Period-2 and Gregory Smyth scored to bring the score back to 5-2.

In Period-3 Adam Maglio added a 6th for the Tycoons after 9 minutes to give them a 6-2 lead. Eric McKenna hit back with a goals in the 10th and 11th minutes to make the final score 6-4.

Aces vs Sharks
In the second match of the night, the Macau Aces were again in good form giving the South China Sharks a touch of the shark treatment. Goals by Chris Long (2) and Tyler Doherty (1) got the Aces off to a great start in Period-1.

But the Sharks hit back in the Period-2 through Jordan So, Jamie Stark and Donald Chow to level the scores at 3-3 going into the final period.

The Aces’ Long scored twice in the first two and half minutes of the final period to push them into a 5-3 lead. Justin Cheng pulled a goal back a minute later leaving the Sharks frantically trying to equalise, but William Hicks scored in the 11th minute to secure the Aces win at 6-4.

The CIHL will meet once more before a Christmas and New Year break with Tycoons playing the Sharks, while the Aces play the Warriors. The first match this Saturday night (Dec 4) will be a tense encounter with the Sharks or Tycoons aiming to stay in touch with break-away leaders the Aces.

Six rounds will be played in 2014 beginning on Jan 4, before a four week finals series that includes the title match played on March 22.