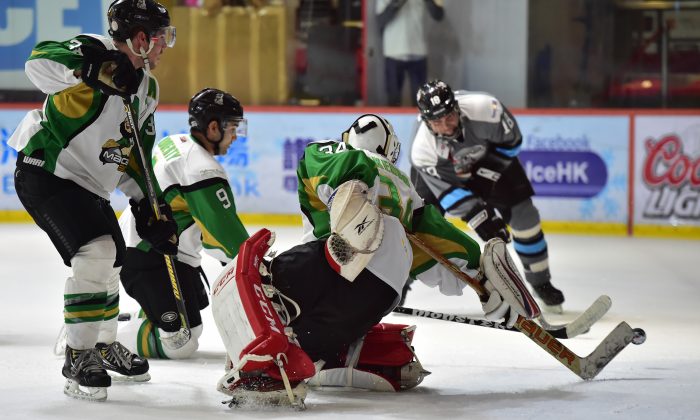 Ronald Matez (18) of South China Sharks scores Sharks’ second goal in their match against Macau Aces in the CIHL at Mega Ice on Saturday Feb 7, 2015, but Aces always kept just one step ahead to win the match 4-3. (Bill Cox/Epoch Times)
HK Ice Hockey

HONG KONG—Macau Aces secured a top of the table finish in the CIHL league at Mega Ice on Saturday Feb 7 finishing with 18-points after winning against the 2nd placed South China Sharks. But all eyes are now on the 3-round semi-finals starting this coming Saturday Feb 14. The line up for the playoffs is Macau Aces against an improving Kowloon Warriors while South China Sharks will face Hong Kong Tycoons.

In last Saturday’s matches (Feb 7) Aces beat the Sharks 4-3 in a very close encounter while Warriors had a well deserved 8-4 win over the Tycoons who are still reeling from the loss of a few key players. Star player of the evening was Eric McKenna who scored 7-goals for Warriors in their win over Tycoons.

Sharks vs Aces
In the top of the table clash between Aces and Sharks it looked like the Aces were going to run away with the spoils after going 3-0 up by the end of the 1st period. Goals by Ryan Wong, Alan Chan and Jeff Ceccacci set them on a winning path.

Sharks snapped back in period-2 with an early goal by Jordan So, but this was cancelled out by a Whitney Olsen strike for the Aces just 2-minutes later. Sharks regrouped, redoubling their attacks and were successful with conversions by Ronald Mathez and Julien Jorand bringing the sharks back within one goal at 3-4 at the ice cleaning break.

In stanza-3 Sharks tried desperately to level the scores, but it was a blank session for both sides with Aces taking the win to finish on top of the league standings.

Tycoons vs Warriors
This bottom of the table contest between Tycoons and Warriors was full of success for Warriors, the bottom but improving team. Warriors opened up a 3-0 advantage against Tycoons with a hat-trick by Eric McKenna but a late goal by Dennis Lo brought the score to 1-3 at the period end.

Warriors advanced their position to the ice cleaning break with further scores by McKenna (2) and Jouni Tormanen (1) and Jonathan Szychta added a brace to keep Tycoons in the game at 6-3.

Although Brad Smith pulled a goal back for the Tycoons midway through the 3rd period McKenna added another 2-goals for the Warriors to take the Warriors to an 8-4 win and McKenna’s personal tally to 7-goals.