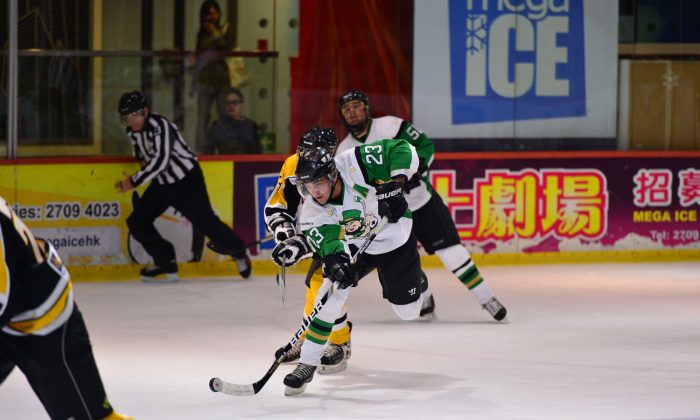 Macau Aces Darren Hynes takes the puck up field in their CIHL Match against HK Tycoons at Mega Ice on Saturday Nov 30, 2013. Hynes scored a vital goal to put his team in front as the Aces won a tight match 4-3. (Bill Cox/Epoch Times)
International

Aces Are High as Warriors Progress in CIHL

Two fast competitive matches in the CIHL at Mega Ice on Saturday Nov 30 saw the Kowloon Warriors and the Macau Aces both edge ahead to win their matches by one goal.

Warriors vs Sharks
In the first match of the evening the Kowloon Warriors took on South China Sharks and it was frantic action right from the whistle, but it was three minutes into the match that Jamie Stark got the Sharks moving before Warriors’ Devin Welsh and Gregory Smyth nailed goals to make it 2-1 to Warriors after the first period.

It was all action in period-2 with a second goal for Welsh and one by Bryan Crane to put Warriors into a 4-1 lead. The Sharks hit back with two goals by Ronald Mathez and a second for Crane to tie the score at 4-4 mid way through the period. With well-planned attacks and good defence no one could break the deadlock.

After the break Smyth and Art Tam had renewed energy and both scored, after some hard tussles with the Sharks, to push Warriors into a 6-4 advantage.

Craig Roessel scored for the Sharks on 9:29 minutes to make the score 6-5 and to press for the equaliser, but Warriors held out to take the win.

It was a great game and jubilant Warriors were pleased to get some additional points. Three Star award winners were Warriors’ Smyth, Crane and Welsh.

Tycoons vs Aces
Goals were hard to come by in a very even match between Hong Kong Tycoons and Macau Aces, especially in the first two periods.

Goals by Sean Tyrrell for Aces and Jim Fanstone for the Tycoons saw the score equal at the end of period-1.

Just a single goal in period-2 to Jacob Trost pushed the Tycoons into a 2-1 lead.

But the Aces fought back in period-3 scoring goals by Tyler Doherty, Darren Hynes and a second for Tyrrell to push Aces into a 4-2 lead.

Andrew Alari got a late goal for the Tycoons to make the score 3-4, but with only a half minute remaining on the clock, the Aces ran down the time to secure the win.

Goal-keepers Dean Tzembelicos (Tycoons) and Korbinian Lutz (Aces) made 100 saves between them, with Lutz getting a three star award. Other award winners were Andrew Alari and Sean Tyrrell.