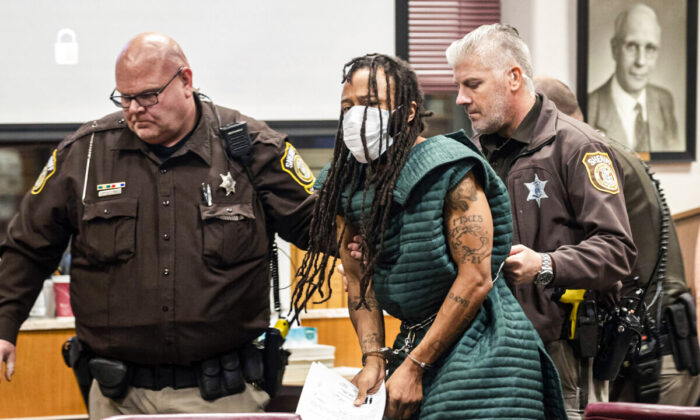 Darrell Brooks is escorted out of the courtroom after making his initial appearance in Waukesha County Court in Waukesha, Wis., on Nov. 23, 2021. (Mark Hoffman/Pool/Milwaukee Journal-Sentinel via AP)
US News

The man witnesses say plowed his vehicle into a parade in Wisconsin in November told reporters in his first interview after being charged that he thinks that he’s being demonized.

“I just feel like I’m being monster—demonized,” Darrell Brooks told Fox News in a jailhouse talk in Waukesha, Wisconsin.

Charging documents allege that he rammed his red Ford Escape into a Christmas parade on Nov. 21, leaving six people dead and some 61 others injured.

Police officers who tried to stop the vehicle said they believe that Brooks’s actions were intentional, as did several witnesses. He could have turned down a side street and avoided striking parade participants but didn’t do so, according to witnesses.

Authorities haven’t outlined a possible motive for the crime and Brooks has offered no such details, Fox News reported.

Brooks told reporters that he was very close with his mother, but that she hadn’t stopped by the jail yet.

Dawn Woods, Brooks’s mother, released a letter earlier on Dec. 1 that expressed condolences for those hurt in the attack, but also criticized a lack of mental health care for her son.

Woods said in the letter, which was sent to media outlets, that her son came from “a loving Christian family” and that he’s the grandson of ministers.

“Darrell has suffered from mental health issues since he was very young. In those years he received counseling and was on medication. When he became an adult a decision was made that he no longer suffered from a mental illness. That decision left him with no insurance or financial means to pay for medication and when [determined] necessary counseling. Mental illness is not cheap to treat but what’s more important dollars spent on treatment and [recourses] or lives lost,” the letter reads.

“Instead of offering help and resources to combat the problem a jail cell was given. Over and over again. When mental illness is not properly treated the person becomes sicker and sicker. It doesn’t go away once a person becomes an adult.”

Woods said she and other family members aren’t attempting to make excuses.

“But we believe what has happened is because he was not given the help and resources he needed,” the letter reads.

Brooks has a lengthy criminal record, with convictions in three states, but was released on $1,000 bail in a different case about two weeks before the parade crash. A pretrial risk assessment performed before Brooks was released stated that he was “diagnosed with a serious and persistent illness in which he is not receiving treatment for.”

Brooks faces up to life in prison if convicted. Wisconsin abolished the death penalty in 1853.