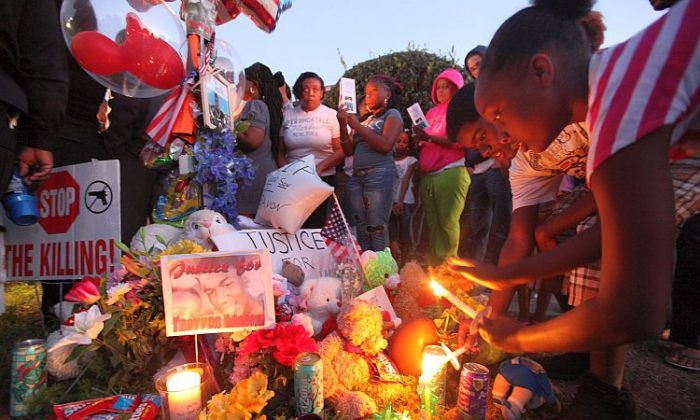 Supporters gather during a candelight vigil at a memorial to Trayvon Martin outside The Retreat at Twin Lakes community where Trayvon was shot and killed by George Michael Zimmerman while on neighborhood watch patrol in Sanford, Florida. (Mario Tama/Getty Images)
US

Over the weekend the attorney for George Zimmerman, the accused shooter in the Trayvon Martin case, has come forward and defended his client to the media and to the public, claiming that Zimmerman is “not a racist.” Friends and family have also come forward to defend Zimmerman, referencing his multiracial background and his work in support of an African-American church congregation.

Craig Sonner, a former prosecutor and an attorney currently based in Altamonte Springs, Fla., found himself thrust into the media spotlight this past week as the legal representative for Zimmerman, and has reiterated that his client is not racist and that he does not believe that Zimmerman’s actions were motivated by racism or racial prejudice.

“At this point, it seems like the case has spiraled into being an issue over race. And, upon talking with my client, I don’t believe that’s the case at all,” Sonner said, in an interview with CNN’s Erin Burnett.

“I talked with him and people who know him, and he’s not known for being a racist. Whatever transpired that night, I think the issue is whether it was an issue of self-defense, or what actually occurred that night, rather than an issue of race,” he added.

Burnett has also publicly confirmed a police report, which stated that his client suffered a bloody nose and believes it to be evidence in favor of Zimmerman’s assertion that his actions were in self-defense. According to Sonner, Martin punched his client in the nose and Zimmerman fell backward to the pavement, resulting in a gash on the back of Zimmerman’s head.

Also coming out in defense of Zimmerman was Joe Oliver, a 53-year-old former TV news reporter and anchor, who is black, and has known Zimmerman for several years, saying that his friend was “extremely remorseful” about having taken Martin’s life.

The shooting of Trayvon Martin, a black teenager, took place on Feb. 26, in a gated community in Sanford, Fla., a city in Seminole County. According to police reports and eyewitness accounts, 17-year-old Trayvon Martin left his father’s fiancee’s house in the gated community of Twin Lakes during a halftime break of an NBA game on television in order to make a trip to the local 7-Eleven.

Zimmerman, who is a Neighborhood Watch captain and was observing Martin from a distance before the incident occurred, reported to Sanford police that Martin was engaging in “suspicious behavior” as the teenager was walking down the street, and that Martin was “up to no good.”

Zimmerman subsequently decided to pursue Martin on his own, despite being informed by the police dispatcher that it was unnecessary to do so.

On his way back to the house, a violent confrontation occurred between Martin and Zimmerman. At some point during the confrontation, Zimmerman fatally shot Martin in the chest with his Kel-Tec 9mm pistol, which he was licensed to carry.

After police arrived on the scene, Martin described the incident to police and claimed self-defense. As Zimmerman’s claims of self-defense could not be disproven, Sanford police did not arrest nor charge him with a crime.

Martin was pronounced dead at 7:30 p.m. He was unarmed, wearing a hooded sweatshirt and carrying a bag of Skittles and Arizona-brand iced tea, which he had purchased from the store.

The case initially garnered little attention, but was propelled into the national media spotlight this past week as Martin’s family and lawyer, Benjamin Crump, called for the Sanford police to investigate the circumstances surrounding Martin’s death, and pressured the federal government and Department of Justice to become involved.

The case has also led to rallies and demonstrations clamoring for justice for Martin and his family and against the systematic problem of racial discrimination.

Across the nation, many Americans donned hoodies (hooded sweatshirts) in memory and support of Trayvon Martin, as Martin was wearing a hooded sweatshirt when he was killed. The national hoodie protests extended to church services on Sunday, as worshippers and church leaders, especially in the African-American community, echoed calls for justice in the Martin case.

The NBA’s Miami Heat, led by stars LeBron James and Dwyane Wade, also took team photos of themselves wearing team hoodies in support of Trayvon and his family.

President Obama and his administration, originally wishing to keep clear of the case and avoid voicing a position, released a statement to the public this past week, saying that “When I think about this boy, I think about my own kids, and I think every parent in America should be able to understand why it is absolutely imperative that we investigate every aspect of this.”

The president also caused controversy for saying, “You know, if I had a son, he’d look like Trayvon.”

Upon pressure from the public and the Martin family, Attorney General Eric Holder and the Department of Justice launched their own investigation into the Martin shooting through the department’s Civil Rights Division to determine if there were racial motivations in Zimmerman’s actions or the Sanford Police Department’s decision not to arrest him.

Sanford Police Chief Bill Lee has temporarily stepped down in response to the public’s focus on the case, saying that it had become “apparent that my involvement in the matter is overshadowing the process.”

The case has also shed light on Florida’s controversial “stand-your-ground” self-defense law, which allows an individual to use deadly force if he or she reasonably believes it is necessary to do so, in order to prevent death or great bodily harm. Former Florida Gov. Jeb Bush, who signed the provision into law, has said that he did not believe that the provision applied in Zimmerman’s case.

Former Republican state lawmaker Durell Peaden, who is one of the law’s authors, has also come forward and stated that he does not believe that the law applies to Zimmerman’s case due to Zimmerman’s pursuit of Martin, adding he believes that Zimmerman should be prosecuted.