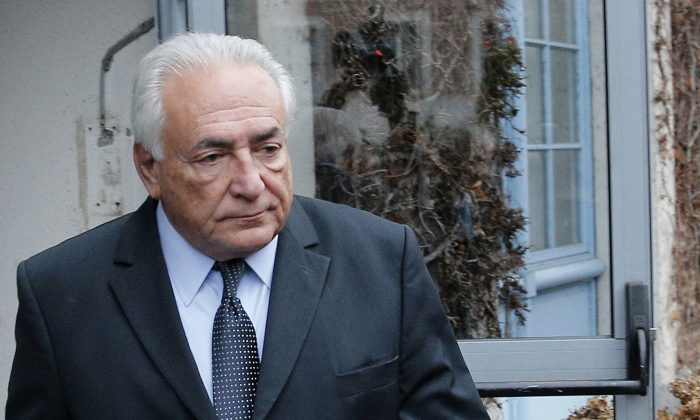 former Managing Director of International Monetary Fund Dominique Strauss Kahn leaving his hotel in Lille, northern France, as he goes on trial for sex charges at a court. Dominique Strauss-Kahn faces a verdict Friday in the last of a string of legal cases that started when a New York hotel maid accused him of sexual assault in 2011. (AP Photo/Christophe Ena)
Europe

The women at the sex parties, however, were prostitutes — and testified that they weren’t having fun at all during these “beast-like scenes.”

The court in Lille decides Friday whether Strauss-Kahn is found guilty of charges of “aggravated pimping.” Despite his sordid testimony, many expect him to be acquitted, citing limited evidence pointing to a punishable crime.

The verdict is the last step in four years of legal drama for Strauss-Kahn that began when a New York hotel maid accused him of sexual assault in 2011, killing his presidential ambitions. That case was later settled out of court.

Strauss-Kahn, 66, is among more than a dozen other defendants, including hotel managers, entrepreneurs, a lawyer and a police chief. They are accused of participating in or organizing collective sexual encounters in Paris, Washington and in the Brussels region in 2008-2011, when Strauss-Kahn was IMF chief — and married.

Each faces up to 10 years in prison and $1.5 million in fines if convicted.

During the three-week trial in February, the man known in France as DSK stuck strictly to his line of defense, saying repeatedly that he did not know that the young women at the parties were prostitutes. He said he thought they were simply “libertine.”

The sometimes tearful testimony of two prostitutes cast a harsh light on Strauss-Kahn’s sometimes brutal sexual practices. But they testified that they had never told him directly about their professions.

Other defendants described how they had voluntarily erected a wall of silence around their powerful friend to protect him from any embarrassing leak.

Even the prosecutor, unusually, asked for Strauss-Kahn’s acquittal, saying the trial did not back up the charge of aggravated pimping, which requires proof that he promoted or profited from prostitution. However, the prosecutor asked for the co-defendants who admitted having organized these evenings and paid the girls to be convicted and sentenced.