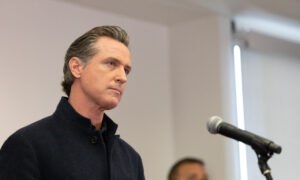 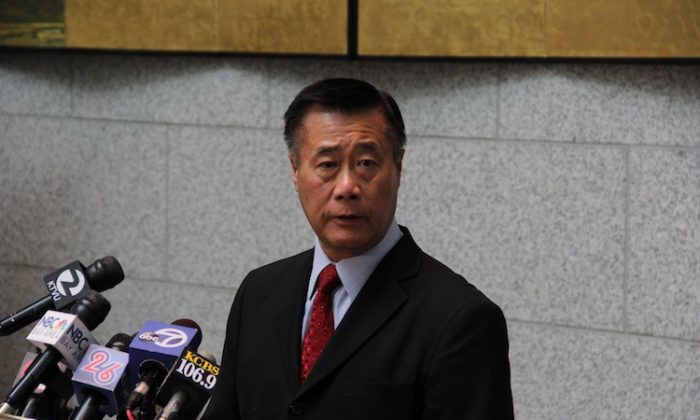 California State Senator Leland Yee speaks at a press conference on a death threat made against him, at the Hiram Johnson State Building in San Francisco on Feb. 14, 2013. (Christian Watjen/The Epoch Times)
Northern California

State Senator Threat: A Bay Area man who is accused of threatening to kill a California state senator had 26 guns in his residence and a large quantity of ammunition.

SACRAMENTO, Calif.—Police found 26 guns, thousands of bullets and dozens of high-capacity ammunition magazines at the home of a Santa Clara man charged with threatening to kill a state lawmaker over proposed gun control legislation, according to search warrants unsealed Thursday.

Authorities also reported finding what they describe as a homemade “destructive device” at the home of Everett Basham.

The 45-year-old was charged in February with possessing assault weapons, explosives and bomb-making materials, as well as threatening state Sen. Leland Yee. The Democrat from San Francisco has proposed legislation that would limit the rapid reloading of assault weapons.

Barrett has pleaded not guilty to a dozen Santa Clara County charges and is awaiting the end of a preliminary hearing that will decide if he should stand trial. He is being held without bail. His lawyer, Daniel Barton, did not immediately return a call or an email seeking comment.

There was no indication in the documents unsealed in Sacramento County Superior Court that police immediately found anything mentioning Yee, the state Capitol or other lawmakers during the search. They did report finding a December article from the San Jose Mercury News on efforts to restrict firearms.

However, they seized and planned to analyze numerous computers, hard drives and cellphones seized from Basham, who once briefly worked for Apple Inc. co-founder Steve Wozniak.

Yee is among several lawmakers nationwide who have been threatened recently over gun control and other emotional topics.

The documents show an officer with the California Highway Patrol’s Dignitary Protection Section served Google Inc. with a search warrant after a threatening email was sent to Yee’s office in January. The company traced the email to Basham’s account, the records said.

The email said the sender, who used an alias, was a “trained marine sniper” who could lie in wait at Yee’soffice or the Capitol.

Searchers reported finding dog tags and other military identification at Basham’s home, though authorities say he forged the credentials.