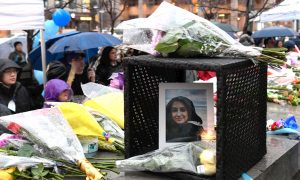 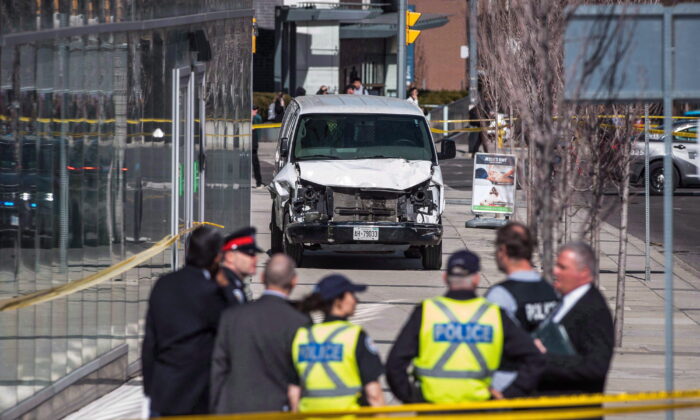 Police are seen near a damaged van in Toronto after a van mounted a sidewalk crashing into a number of pedestrians on Monday, April 23, 2018. (Aaron Vincent Elkaim/The Canadian Press)
Canada

TORONTO—The man who killed 10 people and hurt 16 others after driving a van down a busy Toronto sidewalk has pleaded not guilty at the start of his trial today.

Alek Minassian, of Richmond Hill, Ont., is asking the court to find him not criminally responsible for his actions.

He has admitted in court to planning and carrying out the attack on April 23, 2018.

The judge hearing the case has said the trial will turn on Minassian’s state of mind at the time.

Minassian told a detective just hours after the incident that he carried out the attack as retribution against society because he was a lonely virgin who believed women wouldn’t have sex with him.

In a police interview that was made public, Minassian told the detective he had found solace in an online community for so-called “incels,” men who were involuntarily celibate.

Minassian explained to the detective that incels were at the bottom rung of society, below so-called Chads, who are alpha males who sleep with women, who are known as Staceys.

He said the Chads had to be killed in order to force the Staceys to have sex with men like him, the incels.

A mass attack would cause confusion in the world and allow the incels to rearrange the world order and come out on top, he told the detective.

Minassian’s trial is taking place in front of a judge, Justice Anne Molloy, without a jury—a rarity for first-degree murder trials.

The defence sought to have the case moved out of Toronto, arguing Minassian wouldn’t receive a fair trial with a jury pool of locals.

After negotiations, all sides agreed to proceed by way of a judge alone, thereby keeping the trial in Toronto.

The trial was set to begin in February, but difficulties getting Minassian’s psychological and medical records pushed it to April.

The pandemic then shuttered courts, pushing the trial to November.

With recent COVID-19 restrictions in place during the pandemic’s second wave, court opted for a trial on the Zoom videoconference software.

The trial will not be available to the public online, but anyone can watch a broadcast of the trial at a few rooms reserved at the downtown Metro Toronto Convention Centre.