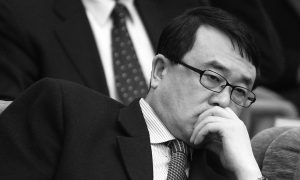 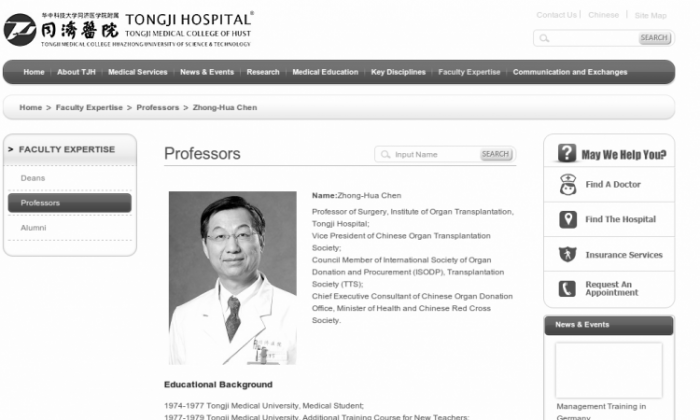 Judging from the outside there is nothing problematic about the Tongji Hospital in Wuhan. In fact, it’s one of China’s most prestigious medical schools. But in 2006, when asked whether the hospital could perform live organ transplantation from Falun Gong prisoners, a staff member in the Kidney Transplant Department said: “Sure, it’s no problem.”

“When you are ready, you can come over directly and we will discuss it in detail,” the voice continued. The call was one of several placed to hospitals around China in March 2006 by the World Organization to Investigate the Persecution of Falun Gong (WOIPFG) in an investigation of allegations of forced, live organ harvesting from Falun Gong practitioners.

But the evidence this call provides of the Wuhan Tongji Hospital’s involvement in live organ harvesting from prisoners of conscience, and the role a senior surgeon at the hospital might have in those operations, are not items that prominent members of the international transplantation community like to discuss.

Dr. Chen Zhonghua, a senior Chinese transplantation surgeon, was director of the Institute of Organ Transplantations at Tongji Hospital when the call was made. He is currently professor of surgery at the same institute.

Chen recently attended and co-authored a paper for The Transplantation Society’s (TTS) Congress, held in Berlin. TTS is the largest society of transplant professionals and exercises “global leadership” over the field; its biennial congresses are attended by thousands.

As well as co-authoring a paper, Chen sat on the board of the Scientific Program Committee for the Congress.

He is also the councilor for Asia 2013 of the International Society for Organ Donation and Procurement, which is a section of TTS.

Chen has played these roles with TTS even though the allegations that he has been involved in forced, live organ harvesting are on public record.

The transcript of the incriminating phone call to Tongji Hospital, whose organ transplantation department Chen led at the time, is published on WOIPFG’s website and is cited as part of a seminal report on the harvesting of organs from practitioners of Falun Gong titled “Bloody Harvest” co-authored by Canadians David Matas, an international human rights lawyer, and David Kilgour, a former crown prosecutor and parliamentarian.

In addition, a criminal complaint was filed against Chen with the U.S. Attorney’s Office in Boston in July 2006 when Chen was in the city to attend the World Transplantation Congress. The complaint accuses Chen of “participating in a forced organ removal program” that targeted Falun Gong.

The TTS’s official position to the use of organs from executed prisoners, as articulated in an email by Dr. Francis Delmonico, the Society’s president-elect, is “unambiguous opposition.”

The TTS resident ethicist produced a question and answer specifically on the China question, and the society has taken some measures to make sure its conferences are not platforms for discussing the latest advancements in removing the organs of just-executed prisoners.

TTS has also engaged in activities meant to encourage a change in Chinese transplantation practices. For example, in March 2012 representatives attended a meeting with Chinese transplant surgeons in Hangzhou and urged the need for a transparent registry of organ donations.

But advocates and researchers say that, particularly on the question of Chen Zhonghua, TTS has not done enough.

“Chen is not an ordinary transplant surgeon. He is a high-level official in the unethical Chinese transplant system,” wrote Arne Schwarz, a Swiss-based researcher of ethics in organ transplant practices, in an email.

Chen was the director of a transplant unit that racked up 4,000 transplants “mostly using prisoner organs,” according to Schwarz.

Schwarz says that by allowing “such a compromised person” to hold the positions he does, “this is compromising TTS as a society concerned with transplant ethics.” Chen should be dismissed, Schwarz said.

According to TTS’s own rules for membership “Members of The Transplantation Society must not be involved in obtaining or transplanting organs from executed prisoners or other donors where there is a risk that an autonomous consent for donation is lacking,” Chen should be disqualified, according to Schwarz.

When The Epoch Times contacted TTS officials to enquire about the apparent discrepancy between the society’s stated policies and Chen’s holding of two official posts with organizations within TTS, TTS officials did not answer directly.

Dr. Gerhard Opelz, a member of the Executive Organizing Committee for the Berlin Congress and president of TTS, referred questions about Chen to Delmonico. Delmonico then referred the questions about Chen back to Opelz. In response to a second request for comment on July 30, Opelz responded by saying that he would be “on vacation until August 20.”

Delmonico wrote in an email that Chen is not a member of TTS. He added that TTS does not approve of ISODP members or councilors. He directed questions about Chen’s position there to ISODP. The website to the ISODP is part of tts.org, the TTS website, and the contact email and address for ISODP is the same as that for TTS. Emails to that address, directed to ISODP, did not receive a response.

TTS does not allow research presented at its conferences if the source of the organs used in the research was questionable; attendees of the congress from the People’s Republic of China (PRC) were made to sign a declaration to that effect.

One result of this rule was that “seven or eight” papers from the PRC were bounced, according to Dr. Jay Lavee, head of the heart transplant unit at Sheba Medical Center in Tel Hashomer, Israel. Lavee made the remark as an audience member during a July 18 conference held by Doctors Against Forced Organ Harvesting, a medical advocacy group, which prepared its own panel in Berlin to shadow the TTS congress.

The rule also led to Chen submitting a paper on research on mice, rather than humans, because the latter would have been inadmissible under TTS rules, according to an email from a TTS member that was familiar with the situation, sent to David Matas.

For TTS, this is a desirable level of distance from the practices they oppose.

Matas says the TTS needs to be stricter.

Part of the reason for the prohibition is so that the TTS is not directly complicit in the abuse of organ transplantation.

But Matas says that it is also important not to “give any status of respectability to people involved in disreputable behavior.”

Presentations like this are flaunted as part of a curriculum vitae, or on the doctors’ websites, Matas says. “They don’t just use it for research on mice. They’re actively involved in transplant tourism, with high fees, and part of that is ‘Well, I spoke at the Berlin Congress.’ The idea that it’s alright because they spoke on mice is cutting a fine line.”

TTS guidelines also say, “No transplant surgeon/team shall be involved directly or indirectly in the buying or selling of organs/tissues.”

It is widely known that most of the organ transplantations performed in China come from executed prisoners. However, it has been a subject of contention as to who, precisely, is being executed.

A growing body of evidence has suggested that primary targets for organ harvesting operations have been practitioners of Falun Gong.

Falun Gong, also known as Falun Dafa, involves doing five meditative exercises and living according to teachings based on the principles of truthfulness, compassion, and tolerance. Because of its rapid growth in popularity—in 1999 more people practiced Falun Gong in China than were members of the Communist Party, and because of fear that the people of China would prefer Falun Gong’s traditional moral teachings to communist ideology, the then-head of the Chinese Communist Party Jiang Zemin began persecuting Falun Gong practitioners in July 1999.

The ability to perform 10,000 transplantations per year at prearranged times, as China does, implies the existence of a pool of roughly 150,000 people ready to be executed, because of the need for blood and tissue matching with the recipient, according to Damon Noto, M.D., a spokesperson for Doctors Against Forced Organ Harvesting, in remarks given at a recent forum on Capitol Hill in Washington, D.C. Researchers say that the Falun Gong prison population is being used to provide this donor pool.

Chen has been accused of participating in this vast scheme. He could not be reached for comment on this article.

For advocates, the gravity of the charges calls for more than a perfunctory response from TTS.

“It’s unbelievable that a professor of medicine, who is supposed to protect human lives, is actively committing crimes against humanity,” wrote Waltraud Ng, the spokesperson for the German Falun Dafa Information Center, in an email. “To prevent unethical doctors from attending a congress like this, only those who sign the Membership Statement of The Transplantation Society should be allowed to join.”