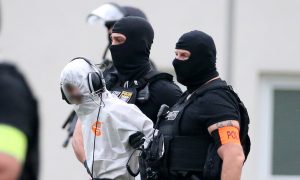 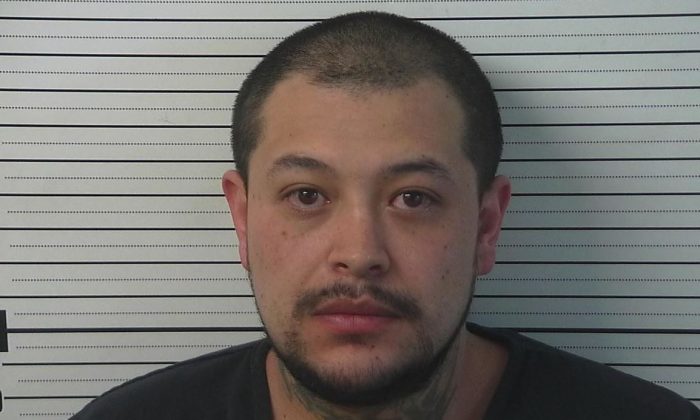 Raymond Hernandez, 29, is accused of raping a 5-year-old girl, an 11-month-old girl, and molesting his girlfriend's 13-year-old daughter. He was arrested on Jan. 28, 2019. (Taos County Adult Detention Center)
Crime and Incidents

An accused child rapist was released by a judge twice before being arrested again on Jan. 28 on rape charges.

Raymond Hernandez, 29, was charged on Jan. 14 with molesting his girlfriend’s 13-year-old daughter early on Jan. 12. He also allegedly sexually assaulted another 13-year-old girl, who was spending the night at the residence.

According to court documents obtained by Taos News, the New Mexico man gave both girls alcohol before the alleged crimes.

Hernandez was charged with criminal sexual contact of a minor, abuse of a child, two counts of contributing to the delinquency of a minor, and one count of battery.

But Taos Magistrate Court Judge Ernest Ortega released the alleged criminal on Jan. 15, ordering him to wear a GPS monitoring unit and saying that he couldn’t have any contact with the alleged victims.

Two days after he was released, Hernandez was charged with raping a 19-month-old girl who lives at the residence where he allegedly sexually assaulted the two teenage girls.

Forensic examination indicated that the child had been raped and investigators also found a witness who said Hernandez raped the child.

Hernandez appeared back in the Taos Magistrate Court on Jan. 24 and was released a second time by Judge Ortega on unsecured appearance bond, which was set at $20,000.

According to law enforcement officials, later that day he was charged with raping a 5-year-old girl at a neighbor’s house in Penasco.

A sheriff’s deputy who responded gathered statements from the child’s parents and interviewed the child, although a physical examination didn’t produce evidence consistent with the allegations, according to court records obtained by Taos News.

Hernandez was found on Jan. 28 and arrested for the third time. He surrendered to New Mexico State Police Officers at a local bail bondsman’s office in Taos, reported Taos News.

Taos County Undersheriff Steve Miera said that a search warrant will allow officers to obtain a sample of Hernandez’s DNA, which he thinks will connect the defendant to the alleged rape of the 5-year-old.

The judge who released Hernandez twice has not commented on why the alleged rapist kept getting released despite, according to officers, committing additional crimes.

New Mexico State Police arrested Raymond M. Hernandez this morning in Taos on an outstanding warrant for the alleged rape of a 5-year-old girl.https://t.co/odIYJnIYoI pic.twitter.com/WHHacWnRdp

Ortega, a Democrat, was first appointed to the position of magistrate court judge by former Gov. Bill Richardson in 2006, according to the New Mexico Matters blog.

“Ernest Ortega is known for his compassion, intelligence, and integrity,” Richardson said in his announcement. “I am confident that Ernest Ortega’s background and work ethic will make him an excellent magistrate judge.”

Prior to becoming a judge, Ortega was a spokesman for the New Mexico Secretary of State. He has also been the director of pretrial services for John Paternoster of the Eighth Judicial District Attorney’s Office.

After the third arrest, Hernandez is being held and a first appearance date for the latest case has not been set.

Children in their first year of life had the highest rate of victimization at 24.8 per 1,000 children of the same age in the national population. About three-quarters of the cases were neglect while about 18 percent were physical abuse. Some children suffered from multiple forms of maltreatment.