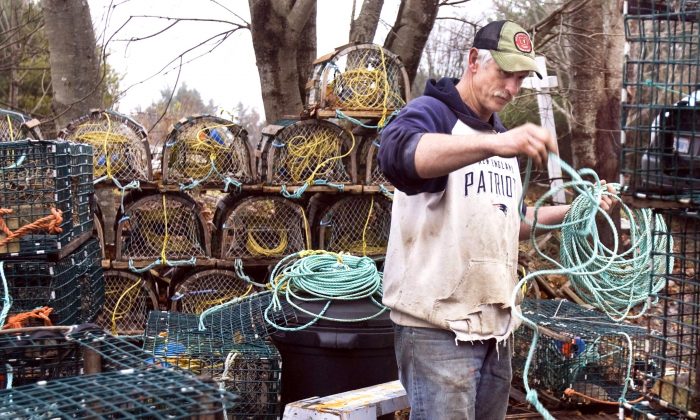 Peter Marshall attaches lines to his lobster traps in Hacketts Cove, N.S., in this file photo. Some fishermen in the Bay of Fundy will alter the way they lay their lines on the ocean floor this season in order to protect North Atlantic right whales from entanglement. (The Canadian Press/Andrew Vaughan)
Canadian Content

PORTLAND, Maine—A high number of accidental deaths this year among the endangered North Atlantic right whale threaten the survival of the species, according to conservation groups and marine scientists.

The right whales, which summer off Canada’s Atlantic coast and New England, are among the most imperilled marine mammals on Earth as populations have only slightly rebounded from the whaling era, when they nearly became extinct.

Twelve of the whales are known to have died since April, meaning about 2 percent of the population has perished in just a few months, said biologist Regina Asmutis-Silvia of the Plymouth, Massachusetts-based group Whale and Dolphin Conservation. She and others who study the whales said this summer has been the worst season for right whale deaths since hunting them became illegal 80 years ago.

“This level of deaths in such a short time is unprecedented,” she said. “I just don’t know that right whales have time for people to figure it out. They need help now.”

Ten of the deaths were off the Atlantic coast of Canada while two were off Massachusetts.

Four of the animals showed evidence of ship strikes while another appeared to have become entangled in fishing gear and at least one is still pending a necropsy, Asmutis-Silvia said. Some were too badly decomposed to determine the cause of death, she said.

Asmutis-Silvia and other conservationists said the deaths are evidence that regulations to prevent strikes and entanglements need to be strengthened in the United States and Canada.

“When whales travel more, they put themselves in harm’s way more,” Kraus said.

The 12 deaths are only the observed mortalities, and there could have been additional natural deaths in the wild, he said.

The future of right whale rescue efforts has been a subject of debate since veteran whale rescuer Joe Howlett died on July 10 after freeing a right whale off New Brunswick. The National Oceanic and Atmospheric Administration responded by suspending efforts to free whales tangled in fishing lines, and later announced that rescue teams would resume most operations.

Fisheries and Oceans Canada is using a host of new methods to try to help the whales, including surveillance flights along the Gulf of St. Lawrence coastline and closing a snow crab fishing area, said Sarah Gilbert, a spokeswoman for the department. Ottawa also recently announced new speed restrictions for ships.

However, the department has suspended responses to entangled right whales following Howlett’s death. “While the entanglement of a whale is an extremely difficult and distressing situation, our first priority is the safety of those involved in marine mammal response,” Gilbert said.

It’s believed 80 to 100 right whales are currently in the Gulf of St. Lawrence.

Charles “Stormy” Mayo, senior scientist at the Center for Coastal Studies in Provincetown, Massachusetts, said the whales will need more immediate action if they are to recover. Only five baby right whales appear to have been born this year, and the species can’t withstand many years when deaths outnumber births, Kraus said.

“It’s really time, if we care about wild animals, to focus on the right whales,” Mayo said. “Its story is definitely not good.”