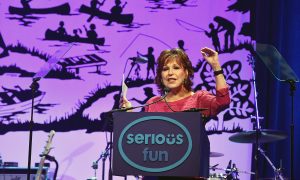 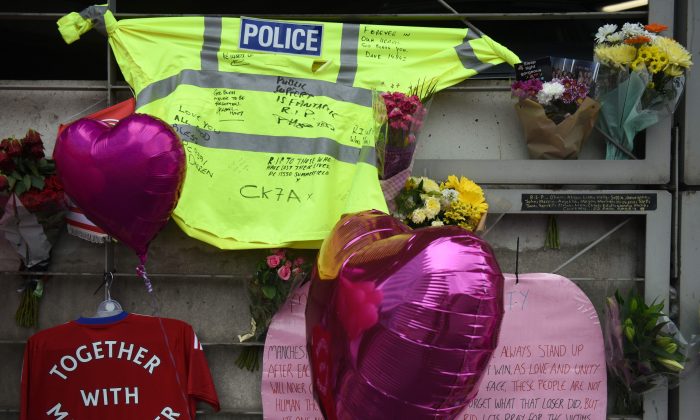 A police officer's hi-vis jacket, adorned with messages of support, is pictured alongside flowers and balloons Victoria Station car park, near to the Manchester Arena in Manchester, northwest England on May 30, 2017, placed in tribute to the victims of the May 22 terror attack at the Manchester Arena. A train station next to the scene of last week's suicide bombing at Manchester Arena, reopened on Tuesday for the first time since the carnage in which 22 people were killed, as the city slowly returned to normal. / AFP PHOTO / Oli SCARFF (Photo credit should read OLI SCARFF/AFP/Getty Images)
Opinion

The world continues to witness unspeakable terrorist acts that violate moral decency, human rights, and the rule of law.

Terrorism is a senseless evil against human dignity, charity, and justice, as well as a cowardly affront to humankind.

Every human being of good will throughout the world must unite their voices to condemn terrorism.

The world must be dedicated to peace, and unite with a clarion voice against terror which includes the following atrocities:

The May 31, 2017 terror attack in Kabul that killed at least 90 people and wounded over 400 others has wounded the soul of Afghanistan.

This attack, near the presidential palace, in the heart of Kabul’s diplomatic community, was meant to undermine the nation’s efforts to build security.

According to initial reports, the bomber detonated explosives in a truck at 8:30am.  The timing of the explosions, during rush hour in a busy public place, was no coincidence.  The objective was to maximize human carnage by terrorizing a busy boulevard.

Once again, cowardice has surfaced through a deranged killer without respect for human life.

This attack, one of the countries deadliest in years, increased the fatality numbers to more than 1,500 since 2009.

May 22: At least 22 people were killed while attending an Ariana Grande concert in Manchester, United Kingdom.  The concern of law enforcement is that the suicide bomber did not act alone, and others may strike again.

May 18: Over 50 people, many of them women and children, were killed in Hama, Syria.

May 15: Boko Haram was responsible for an attack in Maiduguri, Nigeria that killed six farmers tending their fields.

May 12: A suicide bomber detonated a vest killing at least 25 people in Mastung, Pakistan.

April 9: Two separate bombings killed people in Egypt, at least 28 in Tanta and another 17 in Alexandria.  The bombings took place on Palm Sunday, the beginning of Holy Week, the most sacred week of the year for Christians.  One bomb detonated while worshippers were singing hymns at St. George’s Church in Tanta.  The bomb was hidden under a seat in the main prayer area.  The second explosion, outside St. Mark’s Coptic Orthodox Cathedral in Alexandria, detonated at a security checkpoint by a man wearing an explosive belt.

April 3: At least 15 were killed and 64 injured by a suicide bomber at the St. Petersburg metro station in Moscow.

March 22: At least five were killed and 49 injured in London at the famed Westminster Bridge.

March 15:  A suicide bomber killed at least 30 people in Damascus.  Just days earlier, on March 11, 40 were killed in the city in a double bombing, with over 100 injured near Shiite shrines and a cemetery.  The shrines are sacred places, often frequented by foreign pilgrims.

The U.S. Department of Homeland Security (DHS) has many approaches to enhancing America’s vigilance.

One approach is to develop “critical partnerships between the private sector and the public sector in order to mitigate risk and enhance the security and resilience of public gathering sites and public events.”

The DHS encourages the four steps of Connect, Plan, Train, and Report as follows:

CONNECT: Reach out and develop relationships in your community, including local law enforcement. Having these relationships established before an incident occurs can help speed up the response when something happens.

PLAN: Take the time now to plan on how you will handle a security event should one occur. Learn from other events to inform your plans.

TRAIN: Provide your employees with training resources and exercise your plans often. The best laid plans must be exercised in order to be effective.

REPORT: “If You See Something, Say Something™” is more than just a slogan. Call local law enforcement.

The acceleration of terrorism throughout the world demands America’s vigilance.

We must do everything possible to unify as a nation, forging iron-clad partnerships between the public sectors, private sectors, and the community.

When America unifies, we will be on the path of preventing terrorism and reawakening the nation.