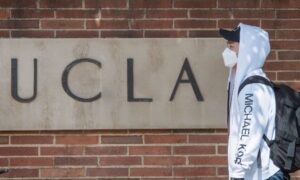 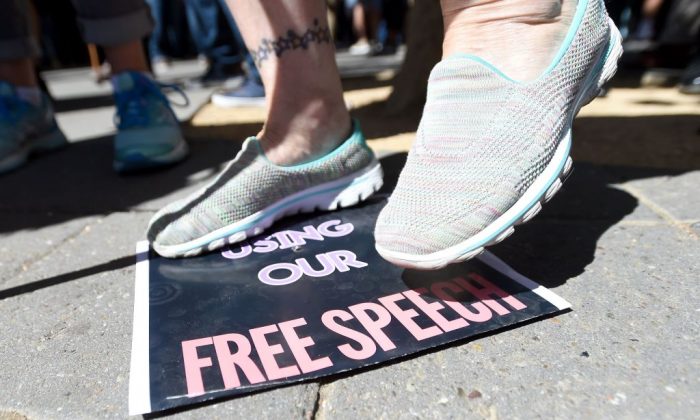 A woman stomps on a free speech sign at the University of California–Berkeley in Berkeley, Calif., on Sept. 24, 2017. (Josh Edelson/AFP/Getty Images)
Viewpoints

The High Court Of Australia has now unanimously rendered its judgment in the Peter Ridd case.

The facts of the Ridd case are well known. James Cook University sacked Peter Ridd, a physics professor, in 2018 for criticising his colleagues’ research on the preservation of the Great Barrier Reef.

He disagreed with the research of his colleagues, who linked climate change and polluted water to coral bleaching of the Reef. For Ridd, the Reef was not in substantial decline, and any deterioration could be reversed.

The university disciplined him on two occasions, and it also imposed a confidentiality obligation on him—which he could not honour.

The Federal Court of Australia in the first instance upheld Peter Ridd’s claim—that his right to academic freedom had been illegally abrogated and that his dismissal was unjustified—it awarded him more than $1 million in compensation. However, that ruling was overturned on appeal.

The High Court was then presented with an opportunity to rule on the protection of academic freedom in universities.

The choice was between relegating academic freedom to the dustbin of history, or reinstating it in our institutions of higher education. The choice was that stark.

There has been great interest in the case.

Graham Young, executive director of the Australian Institute of Progress, wrote on July 1, 2021, in The Spectator magazine, “If Ridd loses, then, without remedial action by the government, academics become mere cyphers of their universities, unable to strenuously critique the work of their colleagues.”

“Instead of fearless seekers after the truth, their role will be as little more than publicists for their respective institutions, and whatever work is produced by their colleagues, good, bad, or indifferent.”

The High Court has now decided that Ridd breached the university’s Code of Conduct and that the intellectual academic freedom protected by Clause 14 of its Enterprise Agreement did not amount to a general freedom of speech provision.

The High Court, in its summary of the judgment, indicated that Ridd’s academic freedom “was subject to constraints contained in Clause 14, including some adopted from the Code of Conduct” and that these constraints “included respect for the legal rights of others, and required that an expression of disagreement with university decision-making be in accordance with applicable processes, including confidentiality obligations.”

Hence, the court rejected the proposition that the quality of the research work undertaken in a university may be publicly criticised, even though the research is funded by the public purse and that the state of the Great Barrier Reef is an issue of concern to all Australians.

But what exactly does academic freedom involve?

I recall that on Sept. 11, 1991, the Higher Education Supplement in The Australian newspaper reported that student protestors prevented the South African Ambassador to Australia from speaking at the Australian National University. The university invited him to discuss his country’s constitutional developments and its transition to a multi-racial democracy.

As he attempted to address attendees at the meeting, students shouted at him, and the cabal caused him to abandon his scheduled presentation.

This incident generated a debate on whether a person’s right to speak on a university campus should depend on the content of their opinion, even if their views are unacceptable to those who want to abrogate their right to speak.

This issue, namely an academic’s right to publicise their views with impunity, even in public, is central to an understanding of the High Court’s judgment in the Ridd case. It squarely raises the question of the place of academic freedom on campus.

Academic freedom, as a concept, originated in Germany where it is known as Lehrfreiheit. Literally translated, Lehrfreiheit means “teaching freedom.”

Professor Walter Metzger of Columbia University explains that the concept “referred to the statutory right of … professors, who were salaried civil servants, to discharge their professional duties outside the chain of command that encompassed other government officials.”

The concept enabled academics to decide on the content of their lectures and to provide them with opportunities to publish the results of their research without seeking prior ministerial, or ecclesiastical approval.

It “protected the restiveness of academic intellect from the obedience norms of hierarchy” and emphasised the right of academics to be free from unreasonable state or university interference in their academic activities.

Academics are people who should be involved in the free and stimulating exchange of ideas.

Alfred North Whitehead, who taught philosophy and education at Harvard University, argued that academics should be involved in the imaginative impartation and extension of knowledge.

To fulfil that function, academics should consider all relevant arguments and fearlessly criticise those who are intellectually deficient.

But academics should abandon or modify their own, sometimes strongly held views if their colleagues make more coherent, persuasive, or insightful arguments.

The practice of academic freedom is a journey involving the eternal search for truth. Academics, by their very nature, are independent and free agents, who individually or collectively, search for a better world.

Following requests by the Australian government, all universities have now adopted a free speech code. Although this is an encouraging development, academics should regard the nurturing of academic freedom as a duty.

The High Court’s judgment in the Ridd case certainly does not help to entrench academic freedom in the country.

It is a sad day for academic freedom, and it may well eventually adversely affect the reputation of Australia’s higher education sector.