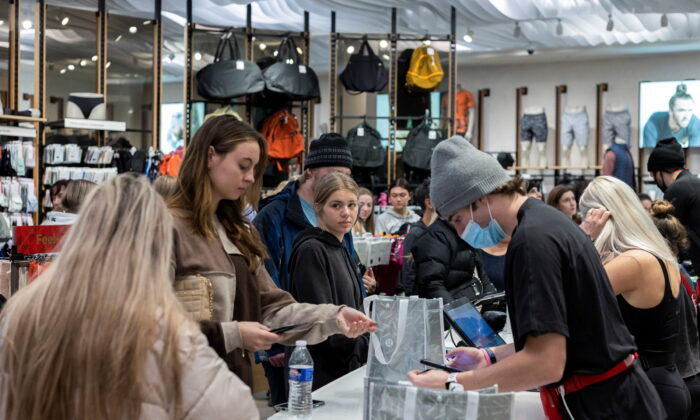 Shoppers pack stores for the Black Friday sales at the King of Prussia shopping mall in King of Prussia, Pa., on Nov. 26, 2021. (Rachel Wisniewski/Reuters)
Business Columnists

Abysmal Black Friday Numbers a Sign of Things to Come?

Are the days of Black Friday producing black eyes coming to an end?

New data from Sensormatic Solutions reveal that traffic at retail stores on Black Friday 2021 tumbled by 28.3 percent compared to the same time in 2019. But foot traffic at brick-and-mortar establishments was up by 47.5 percent from 2020, when many shoppers stayed home because of the pandemic.

However, consumers didn’t substitute standing in line at the nearby Best Buy or Target for browsing online. According to a holiday shopping report by Adobe Analytics, online sales on Black Friday dropped by 1.1 percent for the first time ever to $8.9 billion.

Did shoppers wait until Cyber Monday to purchase the latest gadgets and apparel? Not exactly.

Cyber Monday shopping levels also declined from 2020 figures. Adobe reported that internet receipts decreased by 1.4 percent year-over-year to $10.7 billion. This was also the first time that one of the biggest shopping days of the year recorded a decline in sales.

Industry observers contended that the numbers were disappointing, but noted that consumers are spreading out their shopping this holiday season, going back as far as October to add presents under the Christmas tree.

“With early deals in October, consumers were not waiting around for discounts on big shopping days like Cyber Monday and Black Friday,” said Taylor Schreiner, director at Adobe Digital Insights.

Other market analysts noted that fewer deep discounts and scarcity potentially dissuaded customers from splurging on gifts. Could those be the reasons, or are consumers feeling the pinch of inflation and dissipating finances?

America’s inflationary environment is no secret, and many wage workers are feeling it in their wallets.

Despite average hourly earnings climbing by 0.4 percent in October, the consumer price index advanced by 0.9 percent during the same period. As a result, inflation has wiped out these wage gains.

What’s more, consumers are spending more than they are taking in. Personal income rose by 0.5 percent, while personal spending jumped by 1.3 percent in October. The U.S. household savings rate has been steadily falling since the massive stimulus injection in March.

Clearly, Americans’ appetites for debt have been renewed, with total consumer debt balance growing by $800 billion, or 6 percent, from 2019. These trends may be beneficial in the short term for the retail sector and the broader economy. But trillions of dollars in private debt is an unsustainable development, particularly when the Federal Reserve inevitably raises interest rates to combat inflation.

This is comparable to the state of the economy: using money the country doesn’t have to support anemic growth.

Consumer spending, especially conducted by tapping, inserting, and swiping, fails to provide long-term economic value. Unfortunately, the Keynesian view that consumption—not saving—is what drives the economy has been the de facto policy for decades. Saving, they say, is inimical to economic growth.

Indeed, there’s nothing inherently wrong with demand, no matter how much or of what. But demand is limited by previous production, which sparks compensation with a medium of exchange (money). The individual turns this into savings that will be employed at a later date.

Boosting consumption with artificial means, such as deficit-financed stimulus checks and cheap credit fueled by historically low interest rates, distorts the economy and offers a jolt with only temporary positive effects.

Suffice it to say, consumers are tapped out, and depending on a Visa or Mastercard to consume establishes long-term consequences for the health of retail trade and the U.S. economy. When borrowing is no longer affordable and the printing presses can no longer operate 24/7, how can the public consume?

A recent Deloitte survey found that many high- and low-income individuals are spending more this Christmas because of rampant price inflation. The present-day conditions have led to 11.5 percent of folks embracing their inner Scrooge and abandoning the spirit of gift-giving.

When 54 percent of Americans live paycheck-to-paycheck amid an intensifying cost of living and roughly the same percentage are unable to cover a $1,000 emergency, millions of Americans are justified in shouting “Bah humbug!” this holiday season.