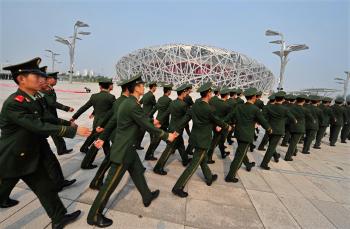 Since China was granted the right to host the 2008 Olympic Games, human rights have progressively deteriorated. (Teh Eng Koon/AFP/Getty Images)
Opinion

Dr Sev Ozdowski
biggersmaller
Print
On August 8, 2008, the Beijing Olympics will commence. Beijing has complained persistently over the past few months that human rights critics have politicised the Olympics and are trying to use the Games for their own propaganda purposes.

Looking back through history, Nazi authorities held the same hopes for the 1936 Berlin Olympics.

The 2008 Olympics and Human Rights

Can we legitimately discuss the human rights issues in the context of Beijing Olympics and if so, why? I would like to offer a three-pronged answer.

First, China, in lobbying the IOC to host the 2008 Olympic Games, promised that it would use the Beijing Olympics to advance the human rights of its people.

By ratifying these conventions, China has ceded part of its sovereignty and its human rights performance has become a legitimate subject of international scrutiny.

After examination of evidence, I regret to conclude that since China was granted the right to host the 2008 Olympics, its civil and political rights record has not improved, but has instead grown progressively worse.

The ongoing brutal occupation and colonisation of Tibet by communist China started 60 years ago continues to this day. The destruction of Tibetan culture, spirituality and environment is well documented. The recently opened railway link appears to be Beijing’s final solution for Tibet – it helps the domination of Tibetans by Han Chinese and further reduces them to second-class citizens in their own country.

Chinese citizens are denied their basic civil and political liberties. For example, more than 1.4 million Chinese citizens were forcibly removed out of Beijing to make room for the Olympics.

The oppression of the Falun Gong spiritual movement is extremely brutal and has the hallmarks of genocide. Falun Gong practitioners are denied basic civil rights – they are arrested, routinely tortured and sent to prisons and forced labour and re-education camps, bypassing any court proceedings. Others are used as slave labour to produce cheap goods for export. A recent report alleges that Falun Gong practitioners are locked up, medically tested and murdered so their corneas, hearts, lungs, livers and kidneys can be stolen for sale to customers.

To sum up, the Chinese authorities are clearly breaching international human rights standards.

The Chinese Government exports its human rights abuses to other countries, such as Zimbabwe, Burma and Darfur.

There is also emerging evidence that Chinese authorities are using their influence to intimidate human rights activists. For example, in late May 2008 the New York Chinese Consulate organised Chinese crowds, numbering several hundred, to physically and verbally attack Falun Gong practitioners over a number of days.

The mass mobilisation of pro-China activists to “defend” the Torch Relay in Canberra from protesting Tibetans and other human rights activists suggested the involvement of Chinese officials there too.

The controversy associated with the Olympic Torch Relay was an expression of the fact that there is growing worldwide concern about continuing human rights abuse in China.

The protest movement also indicates that China has come of age. Contemporary China is starting to be seen for what it really is – a world power with global economic and military interests run by an autocratic government with all the human rights consequences resulting from such status. China is starting to impact on people living in liberal democracies of the West.

This public awareness has resulted in the emergence of worldwide peoples’ movements, which are able to articulate their demands and have an impact on public opinion. For example, the contemporary unrest in Tibet has mobilised many people of goodwill to focus not only on the Tibet situation, but also more broadly on the human rights situation in China.

The Western governments, being democratically elected, will have to reflect changing public opinion about China. This will lead to changes in government attitudes towards the Chinese authorities.

At the moment, there was no serious attempt by the Western public to boycott the goods that are made in China and that dominate our stores. However, one could imagine a significant change in consumer sentiment in the future if China does not address our current human rights concerns.

People power is starting to develop in China itself. The official Chinese statistics indicate enormous growth in citizens’ protests since 1999 – there were 10,000 public protests in 1999. According to unofficial calculations, the number was closer to 130,000 protests in 2007.

Falun Gong appears to be a particularly important element in this struggle. On the one hand, members of the movement are the most victimised citizens’ group in China. On the other hand, they are an important element of China’s growing people’s power movement. Falun Gong has some similarities with the Solidarity movement of Poland. It is popular, well organised, has high moral standards and is no longer afraid of government.

Considering China’s growing interest in projecting its power into the Asia-Pacific region and the United States’s formidable presence in the same region, it is inevitable that this competition will lead to increased international tension in our backyard. Such tension would be much better handled if China is a democratic nation.

It is obvious that democratic change would need to be initiated and delivered from within China. But for the democratisation of China to happen, it needs to be also ushered in and supported from the outside.

There is a school of thought that suggests that the Chinese Government responds only to polite diplomacy and that any political pressure has no impact. Such a view is pure nonsense. China, like any former communist authority, is interested in its good image worldwide because of its ideological and commercial interests. To adopt Neville Chamberlain’s attitude from Munich would lead to a disaster. The policy of appeasement rarely works with aspiring world powers with global aspirations.

Despite my earlier comments about the emergence of people’s power in China, at the moment the Chinese regime seems to be stable. Since the 1989 Tiananmen protests, it seems to have regained the support of its intellectuals and educated classes. It seems that one party rule is not being challenged. The CCP controls the lion’s share of economic resources and dispenses the most valued economic, professional and intellectual opportunities and rewards. Patriotism and nationalism resulting from the current economic success also plays an important role.

The question is how long the Party will be able to maintain China’s economic growth. And its current ability to co-opt its educated elites is yet to be answered. The question is also about actual strength and sustainability of the emerging people’s power. Not that long ago, the Soviet block looked equally stable. But if one takes the Moscow Olympics as a guide, it did not add to the long-term standing of the Soviet Union. On the contrary, it delivered the first important step on the way to the collapse of the Soviet Union 10 years later in 1990. The Nazi regime only lasted nine years following the 1936 Berlin Olympics.

China after the Olympics will certainly be a different nation. My hope remains that China, sooner rather than later, will emerge as a nation where civil liberties are valued and respected and Chinese governments are elected by the people and for the people.

This article is an edited version of an address given by the author to The Activating Human Rights and Peace International Conference in Byron Bay, New South Wales, Australia on July 1–4, 2008. Dr Sev Ozdowski OAM is Adjunct Professor at the Centre for Peace and Conflict Studies.