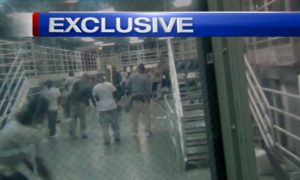 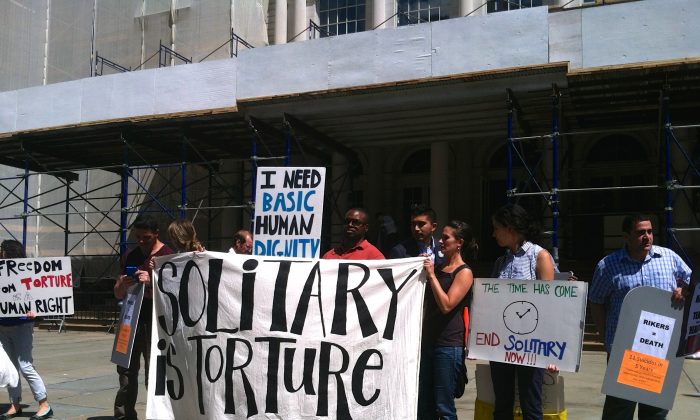 Advocates for better treatment of the incarcerated gather at City Hall in New York, on Monday, Aug. 18, 2014. The city council is expected to pass a bill this Thursday that will require city jails to submit regular reports on who they place in solitary confinement and whether they have a mental disability. (Annie Wu/Epoch Times)
New York

“It’s second by second, the attack on your soul,” Perez said, who now works as an advocate for the mentally ill at the Urban Justice Center.

Perez recalls having suicidal thoughts and crying so much that “you cry even when you run out of tears.” In addition, corrections officers often turned a blind eye to the violence that occurred among inmates.

“The abuses came out of pure neglect,” Perez said.

Perez was among the group of advocates and elected officials gathered at City Hall on Monday to call for an end to correction officers’ violence toward inmates and the excessive use of solitary confinement at Rikers Island, the city’s largest jail facility.

Earlier this month, the U.S. Department of Justice released a report on the treatment of adolescent inmates on Rikers Island, citing a “deep-seated culture of violence” among corrections officers to use force to punish inmates who disobey orders.

At the press conference on Monday, Council member Daniel Dromm said the Council will pass a bill this week that will require city jails to submit a quarterly report on the number of people who have been placed in solitary confinement, the length and reason for their confinement, and whether they have a mental disability.

Former Rikers Island inmate, Dakim Roberts (C) who is currently on parole, at a press conference at City Hall in New York, on Monday, Aug. 18, 2014. Roberts called for an end to solitary confinement and other abuses at the jail facility. (Annie Wu/Epoch Times)

Update: Another legislation that city council member Daniel Dromm introduced and expects the Council to pass this week will eliminate the practice of “time owed,” whereby people who get re-arrested and return to city jails are required to complete the time in solitary confinement that they did not finish during their previous stay.

An internal city health department study, first obtained by the New York Times, found that from January to November of last year, 129 inmates at Rikers suffered serious injuries from altercations with corrections department staff and 77 percent of the inmates were diagnosed with a mental illness.

Dromm and other elected officials in attendance at the press conference condemned the president of the corrections officers’ union, Norman Seabrook, for the lack of real reforms at Rikers. Dromm called on Seabrook to “become part of the solution, not the problem.”

Officials also emphasized that most of the inmates at Rikers are individuals awaiting trial and not yet found guilty, who were placed at the facility because they were not able to pay their bail.

“The purpose of going to Rikers is not to be punished,” said Bronx council member Andy King. The adolescent inmates should instead be rehabilitated at the facility so that they become productive members of society upon being released, he said.

A December 2013 report by the Board of Corrections, the city’s oversight agency for the city’s jails, found that of the 140 adolescents in solitary confinement at that time, 102, or 73 percent of them, were diagnosed as mentally ill.