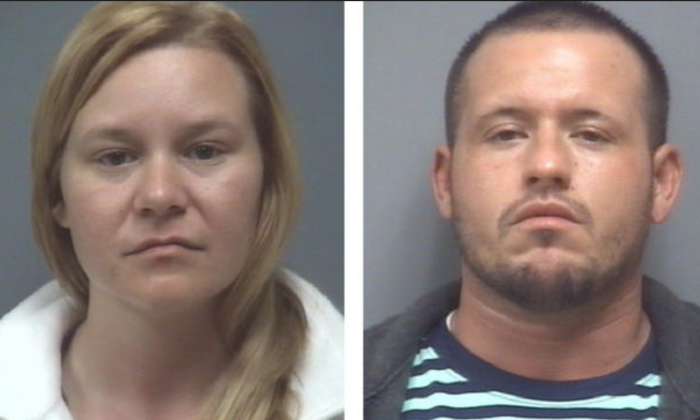 Jaye Lynn Hadley (L) and Justin Cox (R) both face charges in the severe beating of the woman's 5-year-old child, who remains in critical condition in hospital. (Isle of Wight County Sheriff's Office)
Crime and Incidents

A critically injured 5-year-old boy is on life support, and his mother and boyfriend are facing charges after police found shoe prints on the youngster’s bruised body.

According to NBC-CBS affiliate Valley News Live, authorities responded to a call on Monday, Jan. 8, in Isle Wight County, Virginia, over an unresponsive child.

Deputies reportedly arrived at the scene to discover the 5-year-old boy not breathing.

Significant bruising was discovered by medical personnel on the child’s lower back and buttocks, including bruises in the shape of a shoe.

The boy was airlifted in critical condition to a hospital in Norfolk.

According to court documents, the boy’s 32-year-old mother, Jaye Hadley, admitted to police that she beat her son with a shoe.

Valley News Live reported that she also admitted to hitting her son’s head against the floor. And she claimed he “fell” into a wall.

Records show that investigators on the scene noted that there was a hole in the wall.

Hadley, reportedly a former teacher at a child development center, and her boyfriend Justin Cox, 33, are in custody with no bail.

The boy is said to have sustained permanent brain damage and remains in hospital in critical condition.