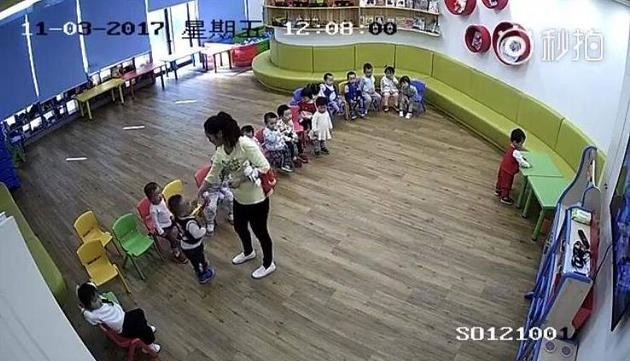 Footage of the abuse at Ctrip’s childcare center in Shanghai taken on Nov. 3, 2017. (Miaopai)
Social Issues

China’s childcare system has recently come under scrutiny after young children between ages one and five at different childcare centers were discovered to have been victims of abuse and cruelty by staff—all exposed within less than a month. The public outcry began with a daycare center in Shanghai.

Via security camera footage, one woman threw a toddler’s backpack on the ground and pushed the young girl, causing her to fall and hit her head on the edge of a desk. Another teacher can be seen forcibly feeding several toddlers wasabi, a spicy condiment. The mistreatment took place at a daycare center in Shanghai, run by Ctrip for children of its employees. Ctrip is one of China’s largest online travel sites. Clips of the child abuse, dated Nov. 1 and 3, were first published onto Weibo, China’s version of Twitter, earlier this month. Ctrip confirmed the authenticity of the video and subsequently reported the abuse to the police.

Subsequently, other abuses were revealed in the past four months at the same daycare center in Shanghai: a toddler’s pants were completely soiled after caretakers refused to change his diapers; a 17-month old toddler was told to stand in the corner of the classroom with her pants stripped down as punishment, and a teacher grabbed a boy by the ear to direct him back to his seat.

Besides the apparent cruelty, what fueled public anger was how the center failed to legally register with Shanghai’s education bureau. According to Chinese news portal Sohu, Ctrip had to shut down the daycare center one week after opening in February 2016, because it failed to get government approval. The daycare center reopened in June this year, after outsourcing operations to Shanghai’s Women’s Federation, which promotes women’s and children’s rights in China. However, the daycare center never got proper approval.

News of child abuse then emerged at daycare centers throughout China. In Nanjing City, a 3-year-old boy was repeatedly beaten by a teacher surnamed Wang, before the teacher smashed his head against a chair, according to a report by Chinese news portal Sohu published on Nov. 6. In Hubei Province, an impatient caretaker used cold water and a soiled brush used to clean the bathroom floor to wash a boy after he defecated in his pants, slapping him on the face at the same time, according to state-run media Global Times on Nov. 10.

In Wuhan City in central China, a girl at preschool was pulled by the mouth and slapped on the ears, while 15 other children had been assaulted as well, reported Hong Kong media South China Morning Post on Nov. 14. And two days later, Global Times reported child abuse at two nursery schools in Beijing. A total of seven nursery schools and daycare centers for young children were discovered with child abuse.

China’s preschool system is one of the worst in the world, according to a report by Liens Foundation, a philanthropic foundation based in Singapore. Titled “Starting Well,” the report placed China 41st in a ranking of 45 countries, in terms of its preschool quality, just ahead of Vietnam, Philippines, Indonesia, and India. China also didn’t fare well in terms of availability and affordability, coming at 42nd and 45th, respectively. According to the report, a Chinese family could pay more to place a child in preschool than to put the child through university, a consequence of the limited number of public pre-schools, and the high cost of tuition at private ones.

The U.S. came in at 24th, just one spot ahead of Canada, with Finland grabbing the top honor.

While the minimum requirement to be a kindergarten teacher in the U.S. is a bachelor’s degree, and a state teaching license for instructors in public schools, China has a much lower standard. According to 2015 data from China’s State Council, only 66 percent of kindergarten teachers have a college degree or higher. In 2014, only 61 percent had a preschool teaching certificate, 17 percent had a certificate but not for preschool, while 22 percent did not have any certificate at all.

Li Yuanhua, formerly an assistant professor of history at Beijing’s China Capital Normal University, a school specializing in training teachers, said that both the Women’s Federation and the local authorities who granted the Shanghai daycare center the business license must be held accountable, in an interview with The Epoch Times.

As for the high occurrence of child abuse, Li believed that the lack of morality in Chinese society was to blame. He explained that educators don’t think what they are doing is invaluable for the children’s future; instead, it is all about making money. So, when children cry or become rowdy, they resort to threats and beatings, according to Li.

“This is called [socialism] with Chinese characteristics, which is all about power. While our society looks to be all good and shiny, it is, in fact, a dark place,” said Mr. Yu, a resident in Shanghai in an interview with The Epoch Times.

Yu added, “We very much welcomed Trump’s visit to China, welcomed him to help improve China’s human rights. Business comes second; what is more important are values and human rights.”